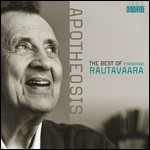 Einojuhani Rautavaara (; born 9 October 1928) is a Finnish composer of contemporary classical music, and is one of the most notable Finnish composers after Jean Sibelius.

Rautavaara was born in Helsinki in 1928 and studied at the Sibelius Academy in Helsinki under Aarre Merikanto from 1948 to 1952 before he was recommended for a scholarship to study at the Juilliard School in New York City. There he was taught by Vincent Persichetti, and he also took lessons from Roger Sessions and Aaron Copland at Tanglewood. He first came to international attention when he won the Thor Johnson Contest for his composition A Requiem in Our Time in 1954.

Rautavaara suffered an aortic dissection in January 2004. He had to spend almost half a year in intensive care but has since recovered and managed to continue his work.

Rautavaara is a prolific composer and has written in a variety of forms and styles. He experimented with serial techniques in his early career but left them behind in the 1960s and even his serial works are not obviously serial. His third symphony, for example, uses such techniques, but sounds more like Anton Bruckner than it does a more traditional serialist such as Pierre Boulez. His later works often have a mystical element (such as in several works with titles making reference to angels). A characteristic 'Rautavaara sound' might be a rhapsodic string theme of austere beauty, with whirling flute lines, gently dissonant bells, and perhaps the suggestion of a pastoral horn.

His compositions include eight symphonies, twelve concertos, choral works (several for unaccompanied choir, including Vigilia (1971-1972)), sonatas for various instruments, string quartets and other chamber music, and a number of biographical operas including Vincent (1986-1987, based on the life of Vincent van Gogh), Aleksis Kivi (1995-1996) and Rasputin (2001-2003). A number of his works have parts for magnetic tape, including Cantus Arcticus (1972, also known as Concerto for Birds & Orchestra) for taped bird song and orchestra, and True and False Unicorn (1971, second version 1974, revised 200102), the final version of which is for three reciters, choir, orchestra and tape.

His latest works include orchestral works Book of Visions (2003-2005), Manhattan Trilogy (2003-2005) and Before the Icons (2005) which is an expanded version of his early piano work Icons. In 2005 he finished a work for violin and piano called Lost Landscapes, commissioned by the violinist Midori Goto. A new orchestral work, A Tapestry of Life, was premiered by the New Zealand Symphony Orchestra in April 2008, directed by Pietari Inkinen.

Many of Rautavaara's works have been recorded, with a performance of his 7th symphony, Angel of Light (1995), by the Helsinki Philharmonic Orchestra conducted by Leif Segerstam on the Ondine label, being a particular critical and popular success - it was nominated for several awards, including a Grammy. Rautavaara's Symphony No. 8 has, so far, been recorded four times.

Rautavaara has recently completed a percussion concerto (subtitled Incantations) for Colin Currie and his second cello concerto (for Truls Mork). He is currently working on a large-scale opera based on texts by Federico García Lorca.

In 2010, Rautavaara's "Christmas Carol" was commissioned and performed by the men and boys choir of King's College, Cambridge (UK) for their annual Festival of Nine Lessons and Carols.

In 2011 Rautavaara completed two larger-scale compositions: Missa a capella (premiered in the Netherlands, November 2011) and a work for string orchestra, "Into the Heart of Light", to be premiered in September 2012.

This article uses material from the article Einojuhani Rautavaara from the free encyclopedia Wikipedia and it is licensed under the GNU Free Documentation License.

Mack The Knife Joey DeFrancesco
Update Required To play the media you will need to either update your browser to a recent version or update your Flash plugin.