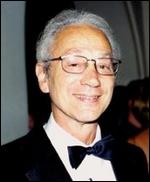 Frederick James Karlin (June 16, 1936 – March 26, 2004) was an American composer of more than one hundred scores for feature films and television movies. He also was an accomplished trumpeter adept at playing jazz, blues, classical, rock, and medieval music.

Born in Chicago, Illinois, he studied jazz composition with William Russo and earned a Bachelor of Arts degree from Amherst College, where he wrote his String Quartet No. 2 as his honors thesis. Following graduation, he moved to New York City, composing and arranging for various bands, including those of Benny Goodman, Harry James, and Chubby Jackson. During this period he also composed and arranged for documentaries, the Radio City Music Hall orchestra, and television commercials.

In 1962, Karlin scored a record album for Columbia of extracts from the comic strip Peanuts, performed by actress Kaye Ballard as Lucy and songwriter Arthur Siegel as Charlie Brown. The innovative score was performed by Karlin entirely on children's musical instruments and toys.

Karlin wrote three books about film composition, On the Track: A Guide to Contemporary Film Scoring (1990), Listening to Movies: The Film Lover's Guide to Film Music (1994), and 100 Great Film Scores, which was published posthumously in 2005. He also wrote a reference book detailing and cataloguing the thousands of recordings the Edison Company distributed between 1914 and 1929.

Karlin died of cancer in Culver City, California. He is survived by a brother, Kenneth; a son, Eric; two daughters, Wendy Karlin and Kathryn Velasquez; and four grandchildren. He was preceded in death by his son Kristopher who was murdered by Wendy Karlin in 1978. Kristopher's death was a great blow to Fred, as he relayed in a September, 1978 article in the defunct Los Angeles Herald Examiner. Wendy served a short-term sentence in a mental hospital. Karlin's widow, Margaret Anne (née Stagg) Karlin died July 31, 2016 in West Hollywood, CA.

This article uses material from the article Fred Karlin from the free encyclopedia Wikipedia and it is licensed under the GNU Free Documentation License.

The Touch Of Your Lips Art Farmer
Update Required To play the media you will need to either update your browser to a recent version or update your Flash plugin.