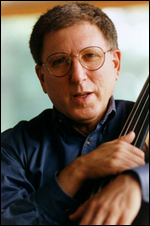 Charles H. "Chuck" Israels (born August 10, 1936) is a composer, arranger, and bassist who is best known for his work with the Bill Evans Trio. He has also worked with Billie Holiday, Benny Goodman, Coleman Hawkins, Stan Getz, Herbie Hancock, J. J. Johnson, John Coltrane, Judy Collins and many others.

Born in New York City,[1] Chuck Israels was raised in a musical family which had relocated to Cleveland, Ohio when Chuck was 10. His stepfather Mordecai Bauman was a singer who performed extensively with composer Hanns Eisler. He, along with Chuck's mother, Irma Commanday, created a home environment in which music was a part of normal daily activity. Paul Robeson, Pete Seeger and The Weavers were visitors to the Bauman home and, in 1948, the appearance of Louis Armstrong's All Stars in a concert series produced by his parents gave Chuck his first opportunity to meet and hear jazz musicians.

In college, Israels had the opportunity to perform with Billie Holiday, and his first professional job out of college was working with pianist Bud Powell in Paris. His first professional recording was Coltrane Time (originally Stereo Drive) featuring John Coltrane, Cecil Taylor, Kenny Dorham, and Louis Hayes. The recording showcased Israels as a composer with his composition "Double Clutching". Israels is best known for his work with the Bill Evans Trio from 1961 through 1966 and for his pioneering accomplishments in Jazz Repertory as Director of the National Jazz Ensemble from 1973 to 1981. He made recordings with Kronos Quartet and Rosemary Clooney in 1985. He was the Director of Jazz Studies at Western Washington University in Bellingham until 2010. Chuck Israels currently resides in Portland, Oregon.[2] In 2011, Israels created the "Chuck Israels Jazz Orchestra" with some of the city's best musicians, who released the critically acclaimed recording Second Wind: A Tribute to the Music of Bill Evans in 2013.

Humphrey Lyttelton, presenting Jazz 625 in 1965, once said that Israels was "a superb technician who handles the double bass as easily as if it were a guitar. ... Chuck Israels is one of the reasons why musicians have come reeling away from performances by the Bill Evans Trio in a mood poised between elation and utter despair."[3]

This article uses material from the article Chuck Israels from the free encyclopedia Wikipedia and it is licensed under the GNU Free Documentation License.

Soulmates Ralf Ruh Trio
Update Required To play the media you will need to either update your browser to a recent version or update your Flash plugin.