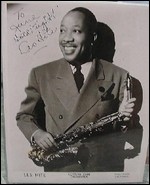 Hite attended the University of Illinois and played saxophone with family members in a band in the 1920s. Following this, he played with Detroit Shannon and then the Helen Dewey Show, but when this group disbanded abruptly, Hite relocated to Los Angeles. There he played with The Spikes Brothers Orchestra, Mutt Carey, Curtis Mosby, and Paul Howard. He became leader of Howard's band in 1930, and played at the Cotton Club in Los Angeles for several years, accompanying Louis Armstrong and Fats Waller among others. They also recorded frequently for film soundtracks and occasionally appeared on camera.

Hite's big band, known as Sebastian's Cotton Club Orchestra, primarily played in Los Angeles, though they occasionally went on tour. Musicians who played in the band include Lionel Hampton, Marshall Royal, Lawrence Brown, Britt Woodman, Joe Wilder, T-Bone Walker, and Dizzy Gillespie. Hite rarely recorded, and for this reason much of the details of his life and work are poorly documented. The only sessions he did were 14 numbers recorded between 1940 and 1942.

This article uses material from the article Les Hite from the free encyclopedia Wikipedia and it is licensed under the GNU Free Documentation License.

This Bitter Earth Randy Crawford & Joe Sample
Update Required To play the media you will need to either update your browser to a recent version or update your Flash plugin.