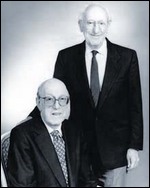 Jay Livingston (March 28, 1915 – October 17, 2001) was an American composer best known as half of a songwriting duo with Ray Evans that specialized in songs composed for films. Livingston wrote music and words along with Evans the lyrics.

Livingston was born Jacob Harold Levison in McDonald, Pennsylvania; he was born to a Jewish mother and father.[1] Livingston studied piano with Harry Archer in Pittsburgh, Pennsylvania. He attended the University of Pennsylvania, where he organized a dance band and met Evans, a fellow student in the band. Their professional collaboration began in 1937. Livingston and Evans won the Academy Award for Best Original Song three times,[2] in 1948 for the song "Buttons and Bows", written for the movie The Paleface;[3] in 1950 for the song "Mona Lisa", written for the movie Captain Carey, U.S.A.; and in 1956 for the song "Whatever Will Be, Will Be (Que Sera, Sera)," featured in the movie The Man Who Knew Too Much. They also wrote "Tammy" for the movie Tammy and the Bachelor in 1957. Livingston and Evans wrote popular TV themes for shows including Bonanza and Mister Ed. They also wrote the Christmas song "Silver Bells" in 1951, for the film The Lemon Drop Kid, initially calling it "Tinkle Bells" but changed it to "Silver" because of the common connotation of "tinkle", as well as "Never Let Me Go" for the 1956 film The Scarlet Hour. Fans of Johnny Mathis can thank Mr. Livingston for All The Time among others.

Livingston appeared as himself with Evans in the New Year's Eve party scene of the 1950 film Sunset Boulevard.

Livingston is an inductee in the Songwriters Hall Of Fame.[4] In 2004, the Pennsylvania Historical and Museum Commission installed a historical marker in McDonald, Pennsylvania, noting Livingston's historic importance.[5]

Livingston died in Los Angeles, California, and was interred there in Westwood Memorial Park Cemetery.[6] His brother, longtime Capitol Records executive Alan W. Livingston, is best known for creating "Bozo the Clown" and signing Frank Sinatra and The Beatles among other legends with Capitol.

This article uses material from the article Jay Livingston from the free encyclopedia Wikipedia and it is licensed under the GNU Free Documentation License.

Baby, Won't You Please Come Home Jimmy Hamilton
Update Required To play the media you will need to either update your browser to a recent version or update your Flash plugin.