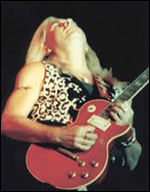 Howard M. Leese (born June 13, 1951 in Hollywood, California) is an American guitarist, record producer, and musical director who played with Heart for 22 years (1975 through 1997). He continues to record and tour as a solo artist, and as guitarist with The Paul Rodgers Band and Bad Company.

Howard received his inspiration to pick up the guitar during the 1960s after seeing Dick Dale, the guitarist in the surf band "the Del-Tones", and feeling the excitement from his playing. He studied violin and music theory at the City College, Los Angeles, and also played in a band called The Zoo.

Leese had his first recording contract with Ed Cobb's Sunburst label[1] at the age of 15, as the band The Zoo with friend and drummer Mike Flicker. Later, when Flicker went to work for Jack Herschorn at Mushroom Studios in Vancouver, Leese went with him as a production manager. While there, he and Shelly Siegel started Mushroom Records.

It was at Mushroom Studios in 1974 that Leese helped produce a demo for Heart. The next year, Mushroom Records signed Heart and released the group's first album Dreamboat Annie which Flicker produced. Leese was assistant producer on the album, and was asked to join the band later that year. He stayed with the band until 1997. Leese was Heart's guitarist, backing vocalist, keyboard player and song arranger.

As of May, 2013, When not touring, Howard is performing in "Raiding the Rock Vault" at the LVH Hotel in Las Vegas, Nevada

Howard is a longtime player and endorser of Paul Reed Smith Guitars. In 2009, Paul Reed Smith announced and launched the "Howard Leese Limited Edition Golden Eagle" in tribute to the #1 guitar that he played on stage for over 15 years.[3] In the late 1970s, he performed live with the rare Sardonyx guitar.[4]

Howard has used and endorsed Toadworks guitar effects since 2004. In January 2009, ToadWorks USA released the Howard Leese Signature Model analog flanger named Barracuda, after the intro in the Heart song of the same name).

HML Guitars was founded in 1994 by Howard Leese. As a woodworker and luthier, he participated in all aspects of construction as well as quality control. HML guitars were totally hand-built in Seattle by luthier Jack Pimentel. Pimentel has continued to build hand-crafted custom guitars under his own brand JP Guitars.[5]

This article uses material from the article Howard Leese from the free encyclopedia Wikipedia and it is licensed under the GNU Free Documentation License.

Lullaby of Broadway Pasadena Roof Orchestra
Update Required To play the media you will need to either update your browser to a recent version or update your Flash plugin.