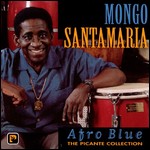 Ramón "Mongo" Santamaría Rodríguez (April 7, 1917 – February 1, 2003) was a rumba quinto master and an Afro-Cuban Latin jazz percussionist. In 1950 he moved to New York City where he played with Perez Prado, Tito Puente, Cal Tjader, and the Fania All Stars. He was an integral figure in the fusion of Afro-Cuban rhythms with R&B and soul, paving the way for the boogaloo era of the late 1960s. His 1963 hit rendition of Herbie Hancock's "Watermelon Man" (recorded on December 17, 1962) was inducted into the Grammy Hall of Fame in 1998.

Santamaría was one of a group of Cuban congueros ("conga players") who came to the United States in the 1940s and 1950s with Armando Peraza, Chano Pozo, Francisco Aguabella, Julito Collazo, Carlos Vidal Bolado, and Modesto Durán.

Santamaría learned rumba as a kid in the streets of Havana's Jesús María barrio. He reminisced: "In the neighborhood where I came from we had all kinds of music, mostly from Africa. We did not leave it alone; we changed it our way. The music we made dealt with religion and conversation. The drum was our tool and we used it for everything" (1979: 19).[1] Gerard points out: "Santamaría, like other drummers of his generation, learned music in the streets by observing different drummers. When he started playing professionally, he learned on the job. His approach was utilitarian, not theoretical" (2001: 29).[2] Santamaría was mentored on bongos and rumba quinto by Clemente "Chicho" Piquero, who played in Beny Moré's band. He recalled: "I would go with Chicho and play the tumbadora and also the [quinto]. I would play everything because I learned a lot from Chicho—because he could play everything" (2001: 137).[3]

When Santamaría soloed in jazz, you heard brilliant phrasing with roots firmly in the folkloric rumba, the authentic rumba of the street where he grew up. In addressing that authenticity, he once told Downbeat Magazine: "You can't learn to play things like guaguancó here. ... You have to have been where it came from. ... You can't listen to records and get those feelings" (1977: 48).[4] Santamaría recorded some of the very first recorded folkloric rumbas. Because he recorded for mainstream jazz labels, his folkloric records were consistently available to the public. Santamaría's albums tended to list the personnel and their instruments; so record buyers came to know other Cuban rumberos, such as Armando Peraza, Francisco Aguabella, Julito Collazo, Carlos Vidal Bolado, Modeto Duran and Pablo Mozo. The 10 inch 33 1/3 rpm phonorecord Afro-Cuban Drums by Santamaría was recorded in SMC's New York City studios on November 3, 1952. Santamaría's next recordings with folkloric rumba were on Changó (re-issued as Drums and Chants) recorded in New York (1954). Yambú (1958), Mongo (1959), and Bembé (1960) followed.

Santamaría's quinto phrasing was dynamic and creative; he had an unmistakable sound, that was uniquely his own. He did not analyze his personal style: "When I play I don't know how I do it, or what I do ... I just play" (2001: 29).[5] The following example is an excerpt from a quinto performance by Santamaría on his composition "Mi guaguancó" (1959).[6] The excerpt shows variations on two main motifs, marked as A and B. Santamaría's repetition of what is typically a secondary phrase (B), makes it the primary motif here.[7]

Santamaría began playing bongos with Septeto Beloña in 1937. In the 1940s he worked in the house band of the prestigious Tropicana nightclub. When Chicho could not join a tour in Mexico in the late 1940s, he recommended Santamaría for the job. Mexico opened Santamaría up to the wider world beyond his island home. After returning from Mexico in 1950, Santamaría moved to New York City, where he became Tito Puente's conga player. In 1957 Mongo Santamaría joined Cal Tjader's Latin jazz combo.

In 1959 Santamaría recorded "Afro Blue," the first jazz standard built upon a typical African 3:2 cross-rhythm, or hemiola.[8][9] The song begins with the bass repeatedly playing 6 cross-beats per each measure of 12/8, or 6 cross-beats per 4 main beats—6:4 (two cells of 3:2). The following example shows the original ostinato "Afro Blue" bass line. The slashed noteheads indicate the main beats (not bass notes), where you would normally tap your foot to "keep time."

In late 1962 Chick Corea had given notice and Santamaría needed a pianist to fill in for the upcoming weekend gigs. Herbie Hancock got the temporary job. Hancock recalls what happened the night that Santamaría discovered "Watermelon Man" the only tune of Santamaría's to reach the top of the pop charts:

[Jazz trumpeter Donald Byrd] "came to this supper club to see how I was doing. Anyway, during one of the intermissions, Donald had a conversation with Mongo, something about, 'What are the examples of the common thread between Afro-Cuban or Afro-Latin music and African-American jazz?' Mongo said he hadn't really heard a thing that really links it together, he was still searching for it. And I wasn't paying much attention to that conversation, it was a little too heavy for me at the time. But then all of a sudden Donald Byrd says, 'Herbie, what don't you play 'Watermelon Man' for Mongo?' And I'm thinking, 'What does that have to do with the conversation they're talking about?' I thought it was a little funky jazz tune.

So I started playing it, and then Mongo, he got up and he said, 'Keep playing it!' He went on the stage, and playing his congas, and it fit like a glove fits on a hand, it just fit perfectly. The bass player looked at my left hand for the bass line, and he learned that. Little by little, the audience was getting up from their tables, and they all got on the dance floor. Pretty soon the dance floor was filled with people, laughing and shrieking, and was having a great time, and they were saying, 'This is a hit! This is fantastic!' It was like a movie! So after that, Mongo said 'Can I record this?' I said 'By all means.' And he recorded it, and it became a big hit. That's how it happened (2001: 54).[11]

The sudden success of the song (which Mongo Santamaria recorded on December 17, 1962) propelled Santamaría into his niche of blending Afro-Cuban and African American musics. Santamaría went on to record Cuban-flavored versions of popular R&B and Motown songs.

This article uses material from the article Mongo Santamaría from the free encyclopedia Wikipedia and it is licensed under the GNU Free Documentation License.

Ain't Misbehavin' Kermit Ruffins
Update Required To play the media you will need to either update your browser to a recent version or update your Flash plugin.