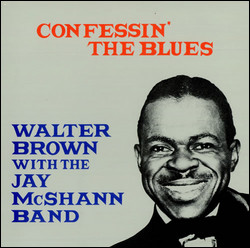 Born in Dallas, Texas, he joined McShann's orchestra, which also included saxophonist Charlie Parker, in 1941.[1] Brown sang on some of the band's most successful recordings, including "Confessin' The Blues" and "Hootie Blues", before leaving to be replaced by Jimmy Witherspoon.

Brown's subsequent solo singing career was unsuccessful, although he recorded for the King, Signature and Mercury labels, and he briefly reunited with McShann for recording sessions in 1949.

Brown died in June 1956 in Lawton, Oklahoma, due to drug addiction.[2]

This article uses material from the article Walter Brown (singer) from the free encyclopedia Wikipedia and it is licensed under the GNU Free Documentation License.