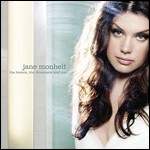 Jane Monheit (born November 3, 1977)[1] is an American jazz and pop vocalist. She has collaborated with John Pizzarelli, Michael Bublé, Ivan Lins, Terence Blanchard and Tom Harrell, and has received Grammy nominations for two of her recordings.

Monheit was born and raised in Oakdale, New York, on Long Island.[1] Her father played banjo and guitar. Her mother sang and played music for her by singers who could also be her teachers, beginning with Ella Fitzgerald. At an early age she was drawn to jazz and Broadway musicals.[2]

She began singing professionally while attending Connetquot High School in Bohemia, New York,[1] from where she graduated in 1995. As a child, Monheit spent her summers as a student at the Usdan Center for the Creative and Performing Arts (now the Usdam Summer Camp for the Arts),[3] and is a recipient of their distinguished alumna award. At the Manhattan School of Music she studied voice under Peter Eldridge; she graduated in 1999,[1] earning a BA in music and receiving the William H. Borden Award for outstanding accomplishment in jazz.

She was runner-up to Teri Thornton in the 1998 vocal competition at the Thelonious Monk Institute of Jazz, in Washington, DC.[1]

When she was 22, she released her first album, Never Never Land (N-Coded, 2000). Like Ella Fitzgerald, she recorded many songs from the Great American Songbook. After recording for five labels, she started her own, Emerald City Records. Its first release was The Songbook Sessions (2016), an homage to Fitzgerald.[2][4]

She spends most of the year on tour with her band, which includes Michael Kanan on piano, Neal Miner on bass, and Rick Montalbano on drums. She also performs with the major symphonic orchestras throughout the country.

Monheit has also been a featured performer in the nationally televised Christmas at the White House, the Capitol Fourth of July Celebration, and the National Memorial Day Celebration. She has appeared on numerous television shows including Emeril, Ramsey Lewis' Legends of Jazz, Late Show with David Letterman, The View, and The Today Show.

In 2013, Monheit was a judge and mentor for the Songbook Academy, a summer intensive for high school students operated by the Great American Songbook Foundation and founded by Michael Feinstein. In 2015, Monheit joined the judging panel for The 14th Annual Independent Music Awards and in doing so, helped to assist the careers of upcoming independent artists.

This article uses material from the article Jane Monheit from the free encyclopedia Wikipedia and it is licensed under the GNU Free Documentation License.

Triste Charlie Byrd Trio & Ken Peplowski
Update Required To play the media you will need to either update your browser to a recent version or update your Flash plugin.