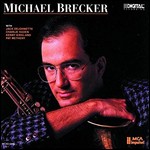 Michael Brecker was born in Philadelphia and raised in Cheltenham Township, a local suburb. His father Bob (Bobby) was a lawyer who played jazz piano and his mother Sylvia was a portrait artist.[4] Michael Brecker was exposed to jazz at an early age by his father. He grew up as part of the generation of jazz musicians who saw rock music not as the enemy but as a viable musical option. Brecker began studying clarinet at age 6, then moved to alto saxophone in eighth grade, settling on the tenor saxophone as his primary instrument in his sophomore year. He graduated from Cheltenham High School in 1967 and after a year at Indiana University he moved to New York City in 1969, where he carved out a niche for himself as a dynamic and exciting jazz soloist. He first made his mark at age 20 as a member of the jazz-rock band Dreams–a band that included his older brother, trumpeter Randy Brecker, trombonist Barry Rogers, drummer Billy Cobham, keyboardist Jeff Kent and bassist Doug Lubahn. Dreams was short-lived, lasting only from 1969 through 1972, but Miles Davis was seen at some gigs prior to his recording Jack Johnson.[5]

Most of Brecker's early work is marked by an approach informed as much by rock guitar as by R&B saxophone. After Dreams, he worked with Horace Silver and then Billy Cobham before once again teaming up with his brother Randy to form the Brecker Brothers. The band followed jazz-rock trends of the time, but with more attention to structured arrangements, a heavier backbeat, and a stronger rock influence. The band stayed together from 1975 to 1982, with consistent success and musicality.

Brecker was in great demand as a soloist and sideman. He performed with bands whose styles ranged from mainstream jazz to mainstream rock. Altogether, he appeared on over 700 albums, either as a band member or a guest soloist. He put his stamp on numerous pop and rock recordings as a soloist. His featured guest solos with James Taylor and Paul Simon are excellent examples of that strand of his work. For example, on Taylor's 1972 album, One Man Dog, Brecker's solo on the track "Don't Let Me Be Lonely Tonight" complements the other acoustic instruments and sparse vocal. On Simon's 1975 album Still Crazy After All These Years, Brecker's solo on the title track is used to a similar effect. His solos are often placed in the bridge, or appended as a rideout coda. Such a combination of musical structure and instrumentation typifies (and to some extent defines) this jazz-rock fusion style. Other notable jazz and rock collaborations included work with Steely Dan, Lou Reed, Donald Fagen, Dire Straits, Joni Mitchell, Eric Clapton, Billy Joel, John Lennon, Aerosmith, Dan Fogelberg, Frank Sinatra, Frank Zappa, Bruce Springsteen, Roger Daltrey, Parliament-Funkadelic, Cameo, Yoko Ono, Todd Rundgren, Chaka Khan, Orleans (band), Blue Öyster Cult, The Manhattan Transfer, Average White Band, Players Association, Paul Simon, James Taylor, Everything but the Girl, Patti Austin, Art Garfunkel, Carly Simon, The Brothers Johnson, and Karen Carpenter.

During the early 1980s, he was also a member of NBC's Saturday Night Live Band. Brecker can be seen in the background sporting sunglasses during Eddie Murphy's James Brown parody. After a stint co-leading the all-star group Steps Ahead with Mike Mainieri, Brecker recorded a solo album in 1987. That eponymously titled debut album marked his return to a more traditional jazz setting, highlighting his compositional talents and featuring the EWI (Electronic Wind Instrument), which Brecker had previously played with Steps Ahead. In 1987 he featured his new solo album at the JVC Newport Jazz Festival, incorporating the EWI. Brecker continued to record albums as a leader throughout the 1990s and 2000s, winning multiple Grammy Awards. His solo and group tours consistently sold out top jazz venues in major cities worldwide.

He went on tour in 2001 with a collaborative group, Hancock-Brecker-Hargrove. This tour was dedicated to jazz pioneers John Coltrane and Miles Davis. Brecker paid homage to Coltrane by performing Coltrane's signature piece, "Naima". The composition is a definitive work for tenor sax; its demanding solo enabled Brecker to show his complete mastery of the instrument. The concert CD from the tour, Directions in Music: Live At Massey Hall (2002), won a Grammy in 2003.

While performing at the Mount Fuji Jazz Festival in 2004, Brecker experienced a sharp pain in his back. Shortly thereafter in 2005, he was diagnosed with the blood disorder myelodysplastic syndrome (MDS). Despite a widely publicized worldwide search, Brecker was unable to find a matching stem cell donor. In late 2005, he was the recipient of an experimental partial matching stem cell transplant. By late 2006, he appeared to be recovering, but the treatment proved not to be a cure. He made his final public performance on June 23, 2006, playing with Hancock at Carnegie Hall. Brecker died from complications of leukemia in New York City. His funeral was held on January 15, 2007 in Hastings-on-Hudson, New York.

On February 11, 2007, Brecker was awarded two posthumous Grammy awards for his involvement on his brother Randy's 2005 album Some Skunk Funk.

On May 22, 2007, his final recording, Pilgrimage, was released and received a good critical response. It was recorded in August 2006 with Pat Metheny on guitar, John Patitucci on bass, Jack DeJohnette on drums and Hancock and Brad Mehldau on piano. Brecker was critically ill when it was recorded, but the other musicians involved praised the standard of his musicianship.[8] Brecker was again posthumously awarded two additional Grammy Awards for this album in the categories of Best Jazz Instrumental Solo and Best Jazz Instrumental Album, Individual or Group, bringing his Grammy total to 15.

Brecker's search in the International Bone Marrow Registry for a match prompted his wife and manager to organize a series of bone marrow drives throughout the world, including the Red Sea, Monterey, and Newport Jazz Festivals. Brecker was subsequently featured in a film directed by Noah Hutton (son of Debra Winger and Timothy Hutton), named More to Live For. It documents Brecker's battle with leukemia, and the production of his final recording. By going public with his illness, Brecker raised tens of thousands of dollars for testing, and signed up many thousands of donors, but was unable to find a match for himself.

Herbie Hancock said that around nine months before his death, Brecker had started practicing Buddhism and three months later joined Soka Gakkai International, a group associated with Nichiren Buddhism. At Brecker's memorial service, Hancock, Wayne Shorter and Buster Williams (who all practice the same form of Buddhism) as well as Brecker's son, Sam, sat in a line with their backs to the audience while facing an inscribed scroll (Gohonzon) hanging in a wooden shrine (Butsudan) and chanted, "Nam myoho renge kyo" for five minutes.[9]

This article uses material from the article Michael Brecker from the free encyclopedia Wikipedia and it is licensed under the GNU Free Documentation License.