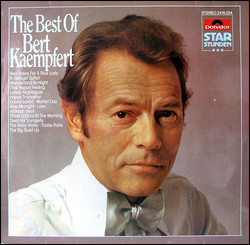 Bert Kaempfert (born Berthold Kämpfert; 16 October 1923 21 June 1980) was a German orchestra leader and songwriter. He made easy listening and jazz-oriented records and wrote the music for a number of well-known songs, including "Strangers in the Night" and "Moon Over Naples".

He was born in Hamburg, Germany, where he received his lifelong nickname, Fips, and studied at the local school of music. A multi-instrumentalist, he was hired by Hans Busch to play with his orchestra before serving as a bandsman in the German Navy during World War II. He later formed his own big band, toured with them, then worked as an arranger and producer, making hit records with Freddy Quinn and Ivo Robi. In 1961, he hired The Beatles to back Tony Sheridan for an album called My Bonnie. The album and its singles, released by Polydor, were the Beatles' first commercially released recordings.

Kaempfert's own first hit with his orchestra had been in 1960, "Wonderland by Night". Wonderland by Night couldn't get a hearing in Germany. Instead, Kaempfert brought the track to Decca Records in New York, who released it in America in 1959; with its haunting solo trumpet, muted brass, and lush strings, the single topped the American pop charts and turned Bert Kaempfert and Orchestra into international stars. Over the next few years, he revived such pop tunes as "Tenderly," "Red Roses for a Blue Lady," "Three O'Clock in the Morning," and "Bye Bye Blues," as well as composing pieces of his own, including "Spanish Eyes (Moon Over Naples)," "Danke Schoen," and "Wooden Heart," which were recorded by, respectively, Al Martino, Wayne Newton, and Elvis Presley. For Kaempfert, little may have brought him more personal satisfaction than Nat King Cole recording his "L-O-V-E". Kaempfert as a producer also played a part in the rise of the Beatles when he signed a Liverpool-based singer named Tony Sheridan, who was performing in Hamburg, and needed to recruit a band to play behind him on the proposed sides. He auditioned and signed a quartet from Liverpool called the Beatles, and even cut a couple of interesting sides of theirs, "Ain't She Sweet", sung by rhythm guitarist John Lennon and the instrumental "Cry for a Shadow", co-authored by Lennon and lead guitarist George Harrison during his sessions for Sheridan. Kaempfert's recording of the Beatles, even as a backing band for Sheridan, proved a vital catalyst to their entire subsequent success. None of the Kaempfert-recorded sides resembled the music for which they became famous, but those Polydor sides cut by Kaempfert played an essential role in their story. On October 28, 1961, a man walked into the music store owned by Brian Epstein to ask for a copy of "My Bonnie," recorded by the Beatles, actually credited to Tony Sheridan. The store didn't have it, but Epstein noted the request and was so intrigued by the idea of a Liverpool band getting a record of its own out that he followed up on it personally. This event led to his discovery of the Beatles and, through his effort, their signing by George Martin to Parlophone Records after getting clear of any contractual claim by Polydor.

Many of his tunes became better known as hits for other artists:

Kaempfert's orchestra made extensive use of horns. A couple of numbers that featured brass prominently, "Magic Trumpet" and "The Mexican Shuffle", were played by both Kaempfert's orchestra and by Herb Alpert & the Tijuana Brass, whose initially Mariachi style, in fact, evolved towards the Kaempfert style as the 1960s progressed. The Brass covered "Magic Trumpet", and Kaempfert returned the favor by covering Brass compadre Sol Lake's number "The Mexican Shuffle". The latter tune evolved into a TV ad, The Teaberry Shuffle.

Many of his hits during this period were composed and arranged with the help of fellow German Herb Rehbein, who became a successful bandleader in his own right. Rehbein's death in 1979 shook Kaempfert deeply. Both Kaempfert and Rehbein were posthumously inducted into the Songwriters Hall of Fame.

In 1967 the Anita Kerr Singers released the LP Bert Kaempfert Turns Us On!, a tribute to Kaempfert featuring the standard hits.

His success as a composer was reflected in five awards received from BMI in 1968 for "Lady," "Spanish Eyes," "Strangers in the Night," "The World We Knew," and "Sweet Maria."

In 1970 Johnny Mathis issued a double-LP album set, Sings the Music of Bacharach & Kaempfert, for Columbia. It consisted of a total 21 tracks in a heavyweight gatefold picture sleeve. The Kaempfert tracks were done in his arrangement style, and the Bacharach tracks were done in the Americans unique upbeat style.

By the 1970s, sales of Kaempfert's music had dropped off somewhat, but he continued to record (his version of the Theme from Shaft was admired by Isaac Hayes himself) and remained popular with audiences. He expanded the musical scope of his band and recorded in a wide variety of styles. He also began to play live concerts with his orchestra, beginning in 1974, with a successful appearance at London's Royal Albert Hall. A cigarette smoker (as illustrated on the posthumous Best of CD), he died suddenly, at the age of 56, following a stroke at his home on Majorca, shortly after a successful appearance in Britain.

Kaempfert used many musicians who were available in Germany and other parts of Europe, including many of the same players who played for James Last, Kai Warner and Roberto Delgado. He featured such top soloists as trumpeters Charly Tabor, Werner Gutterer, Manfred Moch and Ack van Rooyen, trombonists Ake Persson and Jiggs Whigham, and sax/flute player Herb Geller. Drummer Rolf Ahrens supplied the characteristically simple but steady beat, often playing just a snare drum with brushes.

Another contributor to Kaempfert's music was guitarist/bassist Ladislav "Ladi" Geisler, who popularized the famous "knackbass" (crackling bass) sound, using the Fender Telecaster Bass Guitar, which became the most distinctive feature of many Kaempfert recordings - a treble staccato bass guitar sound in which the bass string was plucked with a pick and immediately suppressed to cancel out any sustain. It was Geisler who lent his guitar amplifier to The Beatles for their recording session with Tony Sheridan, after the band's own equipment proved to be inadequate for recording purposes.[1]

Bert-Kaempfert-Platz, in the Barmbek district of Hamburg, Germany, is named in his honour.[3]

Note: titles are for European releases. U.S. releases have other titles.

This article uses material from the article Bert_Kaempfert from the free encyclopedia Wikipedia and it is licensed under the GNU Free Documentation License.