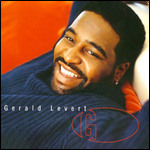 Gerald Edward Levert (July 13, 1966 – November 10, 2006) was an American R&B singer, songwriter and producer. He sang with his brother, Sean Levert, and friend Marc Gordon of the R&B trio LeVert. He was also a member of LSG, an R&B supergroup comprising Keith Sweat, Johnny Gill, and Himself. His father, Eddie Levert, is the lead singer of the 1970s soul group The O'Jays.

Gerald Levert was born to The O'Jays frontman Eddie Levert and his wife Martha in Canton, Ohio on July 13, 1966. Levert grew up in Shaker Heights, Ohio, a suburb of Cleveland. Due to his father's career, Levert would travel with the band regularly. While in high school, Levert's inclination towards music became apparent when he formed the R&B trio LeVert, with his younger brother Sean Levert (deceased, March 30, 2008) and friend Marc Gordon in 1984. Four of the group's seven albums went platinum. These include, I Get Hot in 1985, Bloodline in 1986, The Big Throwdown in 1987, and Just Coolin in 1988. Among the group's memorable hits were, "(Pop, Pop, Pop, Pop) Goes My Mind", "Casanova", and "ABC-123" (not to be confused with The Jackson 5 hit with a similar title).

In 1991, Levert went solo with the albums, Private Line, which went to number one on the R&B charts. The following year, Gerald and his father, Eddie Levert, hit number one on the R&B charts with the single, Baby Hold On to Me. Levert recorded a string of albums throughout the 1990s and early 2000s, that contained the hit singles, "Thinkin' About It" (Pop #12) which was released on September 1, 1998, "Taking Everything" (Pop #11), "Funny", "Mr. Too Damn Good to You", "U Got That Love", and a remake of R. Kelly's "I Believe I Can Fly", along with gospel singer Yolanda Adams.

Levert also sang lead vocals in two songs on the 2002 film documentary "Standing in the Shadows of Motown" - the story of The Funk Brothers. Levert performed "Shotgun" and "Reach Out I'll Be There".

Levert released his tenth album,Voices, in 2005.

Levert wrote and produced songs for other artists such as Barry White, Stephanie Mills, Anita Baker, Eugene Wilde, Teddy Pendergrass, James Ingram, Freddie Jackson, Chuckii Booker, The Winans, Troop and The O'Jays. In the early 1990s, he also helped launch the careers of three Cleveland-area R&B ensembles: The Rude Boys, Men at Large and 1 of the Girls. During the release of Groove On, Levert appeared in the group Black Men United for the hit single "U Will Know" for the film Jason's Lyric, the movie's soundtrack. who was participated in the group and joining with Keith Sweat and Johnny Gill as well. In 1997, Levert teamed up again with fellow R&B singers Keith Sweat and Johnny Gill, to form the supergroup, LSG.[1] The trio released the album Levert-Sweat-Gill the same year, selling over two million copies;[1] it was followed by LSG2 in 2003. In 1999, Levert sang the chorus on the Chris Rock spoken-word comedy piece, "No Sex (In the Champagne Room)". Levert performed a duet with Teena Marie on the latter's 2004 album La Doña. Levert's last collaborations included Jim Brickman on the song "My Angel", for Brickman's 2006 album entitled Escape and on the song "Real S***" from rapper Styles P's album, Time Is Money. Levert was posthumously featured again on former groupmates Keith Sweat's "Knew It All Along" and Johnny Gill from the singer's Til the Morning album, which was released two days later of Levert's fifth anniversary of his death.

Levert began his acting career as Charles Young, his first appearance on The Jamie Foxx Show for 2 episodes with "Just Don't Do It", that aired on November 5, 1998 and Jamie disapproves of his mother (Jo Marie Payton) because she decided to marry him in the episode. In January 2001, Gerald appears again in the series finale "Always and Forever" when Jamie (Jamie Foxx) and Fancy (Garcelle Beauvais) got married and sang the opening ceremony at the wedding and joined by fellow singers Gladys Knight and Marilyn McCoo (without her husband Billy Davis, Jr.). On November 10, 2003, 3 years prior to his death, LeVert's final acting role that aired during his lifetime was when he appeared in an episode of The Parkers, He played T's father in the episode and comes for a visit to start a new band with T.

On November 10, 2006, Gerald Levert was found dead in his bed at his Cleveland, Ohio home when his cousin tried to wake him.[2] Initial reports stated that Levert had died of an apparent heart attack.[3] In February 2007, an autopsy report conducted by the Cuyahoga County coroner's office concluded that Levert's death was caused by a fatal combination of prescription narcotics and over-the-counter drugs. The drugs in his bloodstream included the narcotic pain relievers Vicodin, Percocet, and Darvocet, along with anxiety medication Xanax and two over-the-counter antihistamines. The autopsy also revealed that Levert had pneumonia. The official cause of death was acute intoxication, and the death was ruled accidental. Gerald Levert was only 40 years old.[4]

Following the disclosure of Gerald Levert's cause of death, a family spokesman stated that all the drugs found in Levert's bloodstream were prescribed to the singer. Levert was taking the pain medication because of chronic pain from a lingering shoulder problem and surgery in 2005 to repair a severed Achilles tendon.[4]

Shortly before his death, Levert completed work on what would be his final album, In My Songs. The album was released on February 13, 2007.[5] In June 2007, a book Gerald was working to complete entitled, I Got Your Back: A Father and Son Keep it Real About Love, Fatherhood, Family, and Friendship, was released. The book was initially planned as a tie-in for a Levert album of the same name. I Got Your Back explores Gerald and Eddies father/son relationship, the necessity of male bonding, and importance of repairing fractured families.[6] Levert was also working on a reality show in which he was losing weight along with 12 of his female fans, who were training with him at his palatial home.[7]

Levert had three children: LeMicah, Camryn, and Carlysia.[8] Carlysia, an aspiring singer, appeared on the MTV series My Super Sweet 16, with her father in 2005.

On December 7, 2006, it was announced that Levert, along with soul legend Chaka Khan, gospel singer Yolanda Adams, and R&B singer Carl Thomas were nominated for a Grammy in the category of Best R&B Performance by a Duo Or Group With Vocals for their collaboration on "Everyday (Family Reunion)", a song from the soundtrack of Tyler Perry's Madea's Family Reunion.[9] He was nominated again for the Best Traditional R&B Vocal Performance for his single, "In My Songs". At the 50th annual Grammy Awards, it was announced that Levert had won the award for "In My Songs". Levert's brother and former founding Levert member Sean Levert accepted in his late brother's behalf. On August 17, 2013 in his hometown of Cleveland, Ohio Gerald Levert was inducted into the 2013 inaugural class of The Official R&B Music Hall of Fame along with The O'Jays.

This article uses material from the article Gerald Levert from the free encyclopedia Wikipedia and it is licensed under the GNU Free Documentation License.