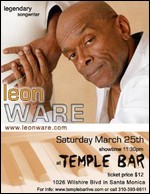 Leon Ware (born February 16, 1940) is an American music artist, songwriter and composer. He was born and raised in Detroit, MIchigan. Besides a solo career as a performer, Ware is best known for producing hits for other artists including Michael Jackson, Quincy Jones, Maxwell, Minnie Riperton and Marvin Gaye, co-producing the latter music artist's album, I Want You.

Leon Ware started his career as a songwriter in 1967. He co-wrote along with Ivy Hunter and Steve Bowden for The Isley Brothers recording of "Got to Have You Back". In 1971, Leon would collaborate with Ike & Tina Turner, co-writing six songs on their United Artist album called Nuff Said. The album reached the top 40 of the R&B charts and also appeared in the pop charts. Later that year, Ware began collaborating with Arthur "T-Boy" Ross, younger brother of Diana Ross. One of the songs they wrote was 'I Wanna Be Where You Are'. Recorded by Michael Jackson for his album, Got To Be There. The single reached the runner-up position of the R&B charts and peaked at 16 on the Billboard Hot 100 in 1972. Ware's songwriting success led to a contract as an artist to United Artists, releasing his self-titled debut album.

Ware wrote for numerous artists during this period including Donny Hathaway and The Miracles. In 1974, Quincy Jones booked Ware as songwriter and performer for two songs off Jones' Body Heat album. The song, "If I Ever Lose This Heaven", hit the R&B charts in September of the year and was covered by the Average White Band. Ware worked with Riperton on Jones' album and collaborated again on Riperton's album, Adventures in Paradise album, composing Riperton's R&B hit, "Inside My Love". Ware and T-Boy Ross worked on demos for Ware's second album, this one to be issued on Motown Records and also for T-Boy Ross to win a deal. One of the demo recordings, "I Want You", was heard by Berry Gordy, who decided the song would be a good fit for Marvin Gaye. Gaye heard the other demos and decided to record much of it on what would be his next album, I Want You. Buoyed by the number-one title track, the album peaked at number-one on the R&B charts and reached the top ten of the Billboard 200 selling over a million copies.

Having given away the material for his album, Ware began again on a solo effort for Motown. The result would be Ware's second album, Musical Massage. Released in September 1976, the album failed to generate similar success and was not properly promoted. Ware continued his songwriting and producing career while also releasing solo albums between 1979 and 2008. During that period, Ware wrote for Teena Marie, Jeffrey Osborne, Loose Ends, James Ingram, Melissa Manchester, Bobby Womack and Lulu, co-writing the latter's European hit, "Independence" in 1993. Ware helped to produce singer Maxwell's debut album, Maxwell's Urban Hang Suite, released in 1996, and considered one of the landmark albums of the neo-soul genre. At the same time of that success, Ware's earlier work became a heavy source of samples in hip-hop music.

As of 2009, Ware was recovering from treatment for prostate cancer, and credited his friend and fellow songwriter Adrienne Anderson with directing him to appropriate medical care.[1]

This article uses material from the article Leon Ware from the free encyclopedia Wikipedia and it is licensed under the GNU Free Documentation License.

It Ain’t Funky Henrik Freischlader Band
Update Required To play the media you will need to either update your browser to a recent version or update your Flash plugin.