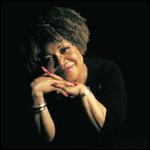 Mavis Staples (born July 10, 1939) is an American rhythm and blues and gospel singer, actress, and civil rights activist. She has recorded and performed with her family's band The Staple Singers, and also as a solo artist.

Staples was born in Chicago, Illinois on July 10, 1939. She began her career with her family group in 1950. Initially singing locally at churches and appearing on a weekly radio show, the Staples scored a hit in 1956 with "Uncloudy Day" for the Vee-Jay label. When Mavis graduated from what is now Paul Robeson High School in 1957, The Staple Singers took their music on the road. Led by family patriarch Roebuck "Pops" Staples on guitar and including the voices of Mavis and her siblings Cleotha, Yvonne, and Pervis, the Staples were called "God's Greatest Hitmakers."

With Mavis' voice and Pops' songs, singing, and guitar playing, the Staples evolved from enormously popular gospel singers (with recordings on United and Riverside as well as Vee-Jay) to become the most spectacular and influential spirituality-based group in America. By the mid-1960s The Staple Singers, inspired by Pops' close friendship with Martin Luther King, Jr., became the spiritual and musical voices of the civil rights movement. They covered contemporary pop hits with positive messages, including Bob Dylan's "A Hard Rain's a-Gonna Fall" and a version of Stephen Stills' "For What It's Worth".

During a December 20, 2008 appearance on National Public Radio's news show Wait Wait... Don't Tell Me! when Staples was asked about her past personal relationship with Dylan, she admitted they "were good friends, yes indeed" and that he had asked her father for her hand in marriage.[2]

The Staples sang "message" songs like "Long Walk to D.C." and "When Will We Be Paid?," bringing their moving and articulate music to a huge number of young people. The group signed to Stax Records in 1968, joining their gospel harmonies and deep faith with musical accompaniment from members of Booker T. and the MGs. The Staple Singers hit the Top 40 eight times between 1971 and 1975, including two No. 1 singles, "I'll Take You There" and "Let's Do It Again," and a No. 2 single "Who Took the Merry Out of Christmas?"

Staples made her first solo foray while at Epic Records with The Staple Singers releasing a lone single "Crying in the Chapel" to little fanfare in the late 1960s.[3] The single was finally re-released on the 1994 Sony Music collection Lost Soul. Her first solo album would not come until a 1969 self-titled release for the Stax label. After another Stax release, Only for the Lonely, in 1970, she released a soundtrack album, A Piece of the Action, on Curtis Mayfield's Curtom label. A 1984 album (also self-titled) preceded two albums under the direction of rock star Prince; 1989's Time Waits for No One, followed by 1993's The Voice, which People magazine named one of the Top Ten Albums of 1993. Her 1996 release, Spirituals & Gospels: A Tribute to Mahalia Jackson was recorded with keyboardist Lucky Peterson. The recording honours Mahalia Jackson, a close family friend and a significant influence on Mavis Staples' life.

Staples made a major national return with the release of the album Have a Little Faith on Chicago's Alligator Records, produced by Jim Tullio, in 2004. The album featured spiritual music, some of it semi-acoustic.

In 2004, Staples contributed to a Verve release by legendary jazz-rock guitarist, John Scofield. The album entitled, That's What I Say, was a tribute to the great Ray Charles, and led to a live tour featuring Staples, John Scofield, pianist Gary Versace, drummer Steve Hass, and bassist Rueben Rodriguez. A new album for Anti- Records entitled We'll Never Turn Back was released on April 24, 2007. The Ry Cooder-produced concept album focuses on gospel songs of the civil rights movement and also included two new original songs by Cooder.[4]

Her voice has been sampled by some of the biggest selling hip-hop artists, including Salt 'N' Pepa, Ice Cube and Ludacris. Staples has recorded with a wide variety of musicians, from her friend, Bob Dylan (with whom she was nominated for a 2003 Grammy Award in the "Best Pop Collaboration With Vocals" category for their duet on "Gonna Change My Way of Thinking" from the album Gotta Serve Somebody: The Gospel Songs of Bob Dylan) to The Band, Ray Charles, Nona Hendryx, George Jones, Natalie Merchant, Ann Peebles, and Delbert McClinton. She has provided vocals on current albums by Los Lobos and Dr. John, and she appears on tribute albums to such artists as Johnny Paycheck, Stephen Foster and Bob Dylan.

In 2003, Staples performed in Memphis at the Orpheum Theater alongside a cadre of her fellow former Stax Records stars during "Soul Comes Home," a concert held in conjunction with the grand opening of the Stax Museum of American Soul Music at the original site of Stax Records, and appears on the CD and DVD that were recorded and filmed during the event. In 2004, she returned as guest artist for the Stax Music Academy's SNAP! Summer Music Camp and performed, again at the Orpheum and to rave reviews, with 225 of the academy's students. In June 2007, she again returned to the venue to perform at the Stax 50th Anniversary Concert to Benefit the Stax Museum of American Soul Music, produced by Concord Records, who now owns and has revived the Stax Records label.

Staples was a judge for the 3rd and 7th annual Independent Music Awards to support independent artists.[5]

Mavis Staples is a recipient of a 2006 National Heritage Fellowship awarded by the National Endowment for the Arts, which is the United States' highest honor in the folk and traditional arts.[6]

In 2009, Staples, along with Patty Griffin and The Tri-City Singers released a version of the song "Waiting For My Child To Come Home" on the compilation album Oh Happy Day: An All-Star Music Celebration.[7]

On October 30, 2010, Staples performed at the Rally to Restore Sanity and/or Fear alongside singer Jeff Tweedy. In 2011 she was joined on-stage at the Outside Lands Music And Arts Festival by Arcade Fire singer Win Butler. The two performed a version of "The Weight" by The Band.[8]

On February 13, 2011, Staples won her first Grammy award in the category for Best Americana Album for You Are Not Alone. In her acceptance speech, a shocked and crying Staples said "This has been a long time coming."[9]

On May 7, 2011, Staples was awarded an honorary doctorate from Berklee College of Music in Boston, Massachusetts.

On May 6, 2012, Staples was awarded an honorary doctorate, and performed "I'll Take You There" with current and graduating students at Columbia College Chicago's 2012 Commencement Exercise in Chicago, Illinois at the historic Chicago Theatre.

On June 27, 2015, she performed on the Park Stage of Glastonbury Somerset UK.

On October 31, 2015, Staples performed with Joan Osborne in Washington, D.C. at The George Washington University's Lisner Auditorium as part of their Solid Soul Tour.

In February 2016 her album Livin' on a High Note was released, Produced by M. Ward the album features songs written specifically for Staples by Nick Cave, Justin Vernon, tUnE-yArds, Neko Case, Aloe Blacc, and others. Discussing the album Staples said:

I’ve been singing my freedom songs and I wanted to stretch out and sing some songs that were new. I told the writers I was looking for some joyful songs. I want to leave something to lift people up; I’m so busy making people cry, not from sadness, but I’m always telling a part of history that brought us down and I’m trying to bring us back up. These songwriters gave me a challenge. They gave me that feeling of, ‘Hey, I can hang! I can still do this!’ There’s a variety, and it makes me feel refreshed and brand new. Just like Benjamin Booker wrote on the opening track, ‘I got friends and I got love around me, I got people, the people who love me.’ I’m living on a high note, I’m above the clouds. I’m just so grateful. I must be the happiest old girl in the world. Yes, indeed.[10]

In January, 2017, Staples was featured as a guest vocalist on "I Give You Power", a single from Arcade Fire benefiting the American Civil Liberties Union.[11]

In February, 2017, Staples appeared on NPR's "Wait, Wait...Don't Tell Me!" in the "Not My Job" segment, answering questions about the rock band The Shaggs.

In April 2017, "Let Me Out", a single from Gorillaz's album, Humanz, was released and featured Staples.[12]

Staples sixteenth album If All I Was Was Black was released on November 17, 2017. Following the release, Staples toured with Bob Dylan. She also appeared on the 2017/18 Hootenanny.

During her career Staples has appeared in many films and television shows, including The Last Waltz, Graffiti Bridge, Wattstax, New York Undercover, Songs of Praise, Soul Train, Soul to Soul, The Psychiatrist, and The Cosby Show.

Mavis!, the first feature documentary about Staples and the Staple Singers, directed by Jessica Edwards, had its world premiere at the South by Southwest Film Festival in March 2015.[13] Mavis! screened in theaters and was broadcast on HBO in February 2016.

On September 8, 2015, Staples was a featured performer on the premiere episode of The Late Show with Stephen Colbert, during which Stephen Colbert thanked her personally for appearing.

Staples was briefly married to Spencer Leak in 1964; they divorced when Staples would not end her music career to stay home.[14][15] She has no children.[16] In the 2015 documentary Mavis! she reveals that Bob Dylan once proposed to her, and she turned him down.[17]

This article uses material from the article Mavis Staples from the free encyclopedia Wikipedia and it is licensed under the GNU Free Documentation License.