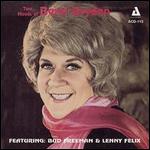 Beryl Audley Bryden (11 May 1920 – 14 July 1998) was an English jazz singer, who played with Chris Barber and Lonnie Donegan. Ella Fitzgerald once said of Bryden that she was "Britain's queen of the blues".

Bryden was born in Norwich, Norfolk, England. An ardent jazz fan she established a Nat Gonella fan club in her teens, before taking up the washboard and singing. Her vocal style was influenced by Bessie Smith but she avoided affectation of an American accent. She was a friend of Black Anna Hannant who ran the Jolly Butchers pub in Ber Street Norwich.

She sang with the Humphrey Lyttelton band and with Freddy Randall also with Mick Mulligan and George Melly at London jazz venues such as the Cook's Ferry Inn, Walthamstow. She became a supporter of visiting American jazz acts when the Musicians Union ban was lifted and befriended, amongst others, Buck Clayton, Louis Armstrong and Bud Freeman, with whom she recorded.

She joined the Chris Barber band on washboard, and played on the group's gold disc earning, "Rock Island Line" in 1955 with Lonnie Donegan on vocals. She later graduated to the Monty Sunshine jazz band, where she covered Bessie Smith ("Young Woman's Blues", "Gimme a Pigfoot (And a Bottle of Beer)") and long-term favourite "Coney Island Washboard Blues", which demonstrated her washboard technique.

She remained active at the end of the British trad jazz boom, and became particularly popular in Northern Europe, playing with the Ted Easton Jazz Band and The Piccadilly Six. In 1979, she headlined the North Sea Jazz Festival with Rod Mason and His Hot Five. In the 1980s she often sang with the New Orleans Syncopators, a Dutch jazz band, whom she recorded an album with.

In the 1970s, became the only British female jazz musician to be awarded the freedom of the City of New Orleans.

She remained active into the 1990s, playing with the Metropolitan Jazz Band, Digby Fairweather, Nat Gonella and her own Blue Boys. She made her last recording with Gonella in 1998, shortly before her death.

This article uses material from the article Beryl Bryden from the free encyclopedia Wikipedia and it is licensed under the GNU Free Documentation License.

I Didn't Know What Time It Was Cécile McLorin Salvant
Update Required To play the media you will need to either update your browser to a recent version or update your Flash plugin.