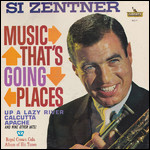 Zentner played violin from age four and picked up trombone a few years later. As a teenager, he was awarded the Guggenheim Foundation Philharmonic Scholarship. He attended college for music and had intended to pursue a career in classical music, but became more interested in pop music after recording with Andre Kostelanetz. Zentner played in the bands of Les Brown, Harry James, and Jimmy Dorsey in the 1940s, then moved to Los Angeles, where he worked as a studio musician. He also landed a job with MGM from 1949 to the mid-50s, and was involved in the music for films such as Singin' in the Rain and A Star Is Born.[1]

In the late 1950s Zentner put together his own studio big band and signed with Bel Canto Records. The Zentner band began recording for Liberty Records in 1959 releasing numerous successful pop/jazz albums during the 1960s and touring steadily with a large well-rehearsed outfit. He also briefly recorded for RCA Victor. Zentner was a tireless promoter and claimed to have played 178 consecutive one-night performances when the band was at its peak. His ensemble was voted "Best Big Band" for 13 straight years by Down Beat, and Zentner himself was voted Best Trombonist in Playboy Jazz Readers' Poll.[1] Zentner was known for his bold, brash and bright playing with great breath control and distinctive vibrato. In 1962, his album Up a Lazy River (Big Band Plays the Big Hits, Vol. 2) (arranged by Bob Florence) won a Grammy Award for Best Pop Instrumental Performance.[2]

Zentner's success was thoroughly unusual; he had a thriving big band going at a time when big band music was, for the most part, on the wane. The general downturn in interest eventually caught up to him, and by mid-decade the orchestra performed only on a limited basis despite recording through the late 1960s. He then moved to Las Vegas and accompanied Mel Tormé at the Blue Room of the Tropicana Hotel. In 1968 he became musical director of the long-running Vegas show Folies Bergere. It wasn't until the 1990s that Zentner returned to big band performance, assembling a new group and releasing several more albums. He suffered from leukemia late in life, though he continued performing into 1999; he died of the disease in early 2000.[1]

This article uses material from the article Si Zentner from the free encyclopedia Wikipedia and it is licensed under the GNU Free Documentation License.

Fifty-six Big Band de Lausanne
Update Required To play the media you will need to either update your browser to a recent version or update your Flash plugin.