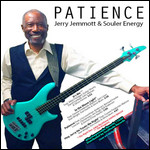 Gerald Stenhouse Jemmott (born March 22, 1946, in the Morrisania section of the Bronx, New York City) is an American bass guitarist. Jemmott was one of the chief session bass guitarists of the late 1960s and early 1970s, working with many of the period's well-known soul, blues, and jazz artists.[1]

After Jemmott's recording sessions started to decline in 1975, he continued to work in film and theater as an arranger and conductor[1] with John Williams and The Boston Pops. He was cited as a major influence by bassist Jaco Pastorius who incorporated Jemmott's funk basslines into his own style. Jemmott hosted the instructional video Modern Electric Bass (1986) which featured advice from Pastorius.

Jemmott recorded solo albums for P-Vine Records, Caught in the Low Beam and The New York View, and Make It Happen! for WhatchaGonnaDo Records. He has written articles, books, and released audio and video bass instruction materials.

He is the recipient of the 2001 Bass Player magazine's Lifetime Achievement Award and Chairman of the Electric Bass Department at the Richard Davis Foundation for Young Bassists.

In 2009 he joined Gregg Allman's backing band ("Gregg Allman & Friends") in addition to Cornell Dupree's Soul Survivors. That same year, he was one of many guests at The Allman Brothers Band's 40th anniversary at the Beacon Theatre in New York City.

With Mike Bloomfield and Al Kooper

This article uses material from the article Jerry Jemmott from the free encyclopedia Wikipedia and it is licensed under the GNU Free Documentation License.