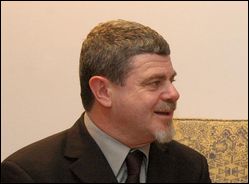 Gustavo Alfredo Santaolalla (born 19 August 1951) is an Argentine musician, film composer and producer. He has won two Academy Awards for Best Original Score in two consecutive years, for Brokeback Mountain in 2005, and Babel in 2006. Most recently, he composed the music for the video game The Last of Us.

Santaolalla was born in El Palomar, Argentina.[1] His professional music career began in 1967, when he co-founded the group Arco Iris, an Argentine band that pioneered the fusion of rock and Latin American folk as part of 'rock nacional'. The band adopted the lifestyle of a yogic commune guided by former model Danais Wynnycka (known as Dana) and her partner, musician Ara Tokatlian. The band had a few hits, such as Mañanas Campestres ("Country Mornings"), and made inroads into different forms of expression (notably a ballet piece for Oscar Aráiz), but Santaolalla felt constricted by the strict requirements of Dana's teachings, which prohibited meat, alcohol and drugs. He left the group in 1975.

A year later, he assembled Soluna, in which he played alongside teenage pianist and singer Alejandro Lerner and his then-girlfriend Monica Campins. Together they recorded just one album (Energía Natural, 1977). Santaolalla left for Los Angeles, where he adopted a rock and roll sound and made the rounds with his band Wet Picnic, together with ex-Crucis member Anibal Kerpel.

He briefly returned to Argentina in 1981, to produce Leon Gieco's Pensar en Nada and record his first solo album.

As a solo artist, he has recorded three albums. His first self-titled album, Santaolalla (1981), broke new ground by incorporating the "eighties" sound into rock in Argentina for the first time. He was joined by Lerner and the Willy Iturry-Alfredo Toth rhythm section, who were two-thirds of the band GIT. His second album, titled Gas, was released in 1995. His most recent solo album, titled Ronroco (1998), contained several tracks with the characteristic sound of the charango, a folk string instrument, that poured into what constituted his next significant endeavor: music for movies. Ronroco also contains his solo piece for charango Iguazu, which has been used in The Insider by Michael Mann, Collateral also by Michael Mann, Babel by Alejandro González Iñárritu, a 2007 Vodafone TV commercial, as well as the HBO TV series Deadwood and the Fox TV series 24. It also contains the track De Ushuaia a La Quiaca used by Walter Salles in his The Motorcycle Diaries.

Santaolalla transferred his efforts to film soundtracks in the late 1990s, producing albums for the films Amores Perros, 21 Grams and The Motorcycle Diaries. Currently based in California where he first moved in 1978, one of his more recent contributions has been to the instrumental music for the soundtrack to the 2005 Ang Lee film, Brokeback Mountain, from which "A Love That Will Never Grow Old" won the 2006 Golden Globe Award for Best Original Song. Santaolalla has received a 2006 Academy Award for Achievement in music written for motion pictures (Original score) for Brokeback Mountain. In 2007, he received his second Academy Award for the film score to Babel, beating out such composers as Thomas Newman, Alexandre Desplat, and Javier Navarrete. Gustavo dedicated the award to his father and to his country Argentina.

In addition to his film work, Santaolalla has acted as the producer of Gaby Kerpel's Carnabailito and co-produced the Kronos Quartet's Nuevo, an album which renders homage to the rich musical heritage of Mexico. He has also been part of the resurgent neo-tango movement, as prime mover behind the Bajofondo Tango Club collective. He is also mentioned as the co-producer of Calle 13's song "Tango del Pecado", from their upcoming album Residente o Visitante. In 2005 he received the Platinum Konex Award as best Argentine artistic producer of the 1995-2005 decade.

In 2008, Santaolalla composed the soundtrack for the Louis Vuitton film "Where will life take you?" directed by Bruno Aveillan, as part of the "Journeys" Campaign.

In 2008, Santaolalla recorded two songs on "All You Need Is Me", a single by British singer Morrissey. The tracks, "Children In Pieces" and "My Dearest Love" were recorded in Los Angeles with producer Jerry Finn.

He directed music for Aamir Khan's latest movie Dhobi Ghat, which was released on January 21, 2011.

Santaolalla has also collaborated with Argentine Composer Osvaldo Golijov on several projects commissioned by soprano Dawn Upshaw. These include the opera, Ainadamar, based on the murder of Spanish poet Federico García Lorca, and Ayre, a collection of folk songs, in which Santaolalla plays with a group that calls itself The Andalucian Dogs.

Among his more recent projects are the score for the 2012 film On the Road, produced by Francis Ford Coppola and directed by Walter Salles. In 2012 he was nominated for Producer of the Year by Latin Grammy Award for Best Producer of the Year for his work in De Noche (Antonio Carmona), Entre la Ciudad y el Mar (Gustavo Galindo) and Rêverie (Luciano Supervielle) co- produced with Juan Campodónico from Bajofondo.

He composed the score for the 2013 survival adventure video game The Last of Us Santaolalla's first experience in the video game industry.

Santaolalla currently lives in Los Angeles, California with his wife for over twenty-three years Alejandra Palacios and children Luna (b. 1994) and Don Juan Nahuel (b. 1999). His eldest daughter Ana (b. 1980) is from his previous relationship with Monica Campins.

This article uses material from the article Gustavo Santaolalla from the free encyclopedia Wikipedia and it is licensed under the GNU Free Documentation License.