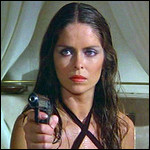 Barbara Bach (born Barbara Goldbach; August 27, 1947) is an American actress and model known as the Bond girl Anya Amasova from the James Bond film The Spy Who Loved Me (1977). She subsequently starred in Force 10 from Navarone (1978) with Robert Shaw and Harrison Ford. She is married to former Beatle Ringo Starr.

Bach was born in Rosedale, Queens, and grew up in Jackson Heights, the daughter of Marjorie and Howard I. Goldbach (1922-2001), a policeman. Her mother is Irish Catholic, while her father was Jewish (from a family from Germany, Austria, and Romania).[1] She attended a Catholic high school, Dominican Commercial, in Jamaica, Queens.[2] Bach left school at age 16 to become a model. She is not related to Catherine Bach, whose birth name is Bachman.

In 1972, Bach co-starred with two other Bond girls, Claudine Auger and Barbara Bouchet in the mystery La Tarantola dal ventre nero (a giallo film) and had small roles in other Italian films.

In 1977, her role as the Russian spy Anya Amasova in The Spy Who Loved Me gained her recognition as an international sex symbol. Bach remarked after the film that Bond is "a chauvinist pig who uses girls to shield him against bullets."[3] The following year she appeared in the movie Force 10 from Navarone. She lost a role to actress Shelley Hack when she auditioned for the television series Charlie's Angels.[4] Bach has 28 films to her credit. She has not worked as an actress since the mid-1980s. She featured in her own pictorial in Playboy in June 1977,[5] and she was the cover girl and had her own pictorial in January 1981.[6] She also had a cameo in a September 1987 special issue on the Bond girls.[7]

Bach met Italian businessman Augusto Gregorini on a flight to Rome in 1966. They were married in 1968 and moved to Italy where they had a daughter, singer-songwriter Francesca Gregorini (born August 7, 1968) and a son Gianni (born in 1972). In 1975, Bach separated from Gregorini and moved back to the United States with her two children.

Bach met Ringo Starr on the set of the film Caveman in February 1980, and they were married on April 27, 1981, a few weeks after the film's release. In recent years, Bach has accompanied Starr on his tours and has appeared in some of his music videos, playing on some of his songs. They live in the English village of Cranleigh.

In October 1988, Bach and Starr attended a detox clinic in Tucson, Arizona, each receiving a six-week treatment for alcoholism.[8]

Bach holds a master's degree (UCLA, 1993) in psychology. She started the Self Help Addiction Recovery Program (S.H.A.R.P.) with the help of George Harrison, Eric Clapton and Pattie Boyd, the former wife of both Harrison and Clapton. Bach and Starr created The Lotus Foundation, a charity with many sub-charities.

Barbara Bach, along with her husband Ringo, is vegetarian.[9]

This article uses material from the article Barbara Bach from the free encyclopedia Wikipedia and it is licensed under the GNU Free Documentation License.

Now Or Never Jackie Ryan
Update Required To play the media you will need to either update your browser to a recent version or update your Flash plugin.