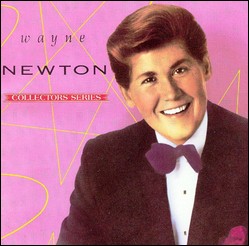 Carson Wayne Newton (born April 3, 1942) is an American singer and entertainer. One of the best-known entertainers in Las Vegas, Nevada, he is known by the nicknames The Midnight Idol, Mr. Las Vegas and Mr. Entertainment. His well known songs include 1972's "Daddy, Don't You Walk So Fast" (his biggest hit, peaking at No. 4 on the Billboard chart), "Years" (1980),[1] and his vocal version of "Red Roses for a Blue Lady" (1965). He is best known for his signature song, "Danke Schoen" (1963), which was notably used in the score for "Ferris Bueller's Day Off" (1986).

Newton was born Carson Wayne Newton in Norfolk, Virginia, to Evelyn Marie (née Plasters; later changed to Smith) and Patrick Newton, who was an auto mechanic.[2][3][4] Both of his parents were of Native American descent; his father was Powhatan and Irish and his mother was Cherokee and German.[5][6] While his father was in the U.S. Navy, Newton spent his early childhood in Roanoke, learning the piano, guitar, and steel guitar at the age of six.[7]

While Newton was still a child, his family moved to a home near Newark, Ohio. He began singing in local clubs, theaters, and fairs with his older brother, Jerry. Because of his connection with Newark and still having family there, the city selected Newton to be the grand marshal of its bicentennial parade in 2002. Wayne's severe asthma forced the family to move to Phoenix, Arizona in 1952, where he attended North High School (Phoenix, Arizona). The brothers, as the Rascals in Rhythm, appeared with the Grand Ole Opry roadshows and on ABC-TV's Ozark Jubilee; and performed for the president and auditioned unsuccessfully for Ted Mack's Original Amateur Hour.

In the spring of 1958, toward the end of Wayne's junior year in high school, a Las Vegas booking agent saw a local TV show, Lew King Rangers Show, on which the two Newton brothers were performing and took them back for an audition. Originally signed for two weeks, the brothers eventually performed for five years, doing six shows a day. On September 29, 1962, they first performed on The Jackie Gleason Show. He would perform on Gleason's show 12 times over the following two years. In the early to mid-1960s, Wayne also acted and sang as "Andy" the baby-faced Ponderosa ranch hand on the classic western TV series, Bonanza.

Career as an entertainer

Many prominent entertainment icons such as Lucille Ball, Bobby Darin, Danny Thomas, George Burns, and Jack Benny lent Newton their support. In particular, Benny hired Newton as an opening act for his show. After his job with Benny ended, Newton was offered a job to open for another comic at the Flamingo Hotel, but Newton asked for, and was given, a headline act. In 1972 his recording of "Daddy, Don't You Walk So Fast" sold over one million copies, and was awarded a gold disc by the R.I.A.A. in July 1972.[8] Influential music director Rosalie Trombley of Canadian station CKLW "The Big 8" radio in the Detroit area decided to add the record to her radio station to embarrass her ex-husband, who wasn't faithful about seeing his children, as Trombley explained in the documentary Radio Revolution: The Rise and Fall of the Big 8. The record topped the Canadian charts. From Detroit, "Daddy Don't You Walk So Fast" took off and broke nationwide.

From 1980 through 1982, The Beach Boys and The Grass Roots performed Independence Day concerts on the National Mall in Washington, D.C., attracting large crowds.[9][10] However, in April 1983, Newton, a friend and supporter of President Reagan and a contributor to Republican Party political campaigns, performed at the Mall's 1983 Independence Day celebration.[10][11][12][13]

On May 23, 1989, Newton's live stage show was broadcast as a Pay-Per-View event called Wayne Newton Live in Concert. In an odd break with tradition, Newton didn't perform his trademark songs Danke Schoen or Red Roses for a Blue Lady. Newton did, however, close the show with a special finale of MacArthur Park, which culminated with an onstage rainfall.

On December 12, 1992, Newton hit #1 on the Cashbox Pop and Country charts with the Elvis inspired song, "The Letter." [14] Controversy swirled around this chart feat, as "The Letter" did not chart at all on Billboard Magazine's authoritative Hot 100 chart, Adult Contemporary chart or "Bubbling Under" chart. It did not make the Radio and Records magazine chart either. This marked the first and only time in history that a record hit #1 on the Cashbox Top 100 chart, yet failed even to chart on Billboard's Hot 100.[15]

In 1999, Newton signed a 10-year deal with the Stardust, calling for him to perform there 40 weeks out of the year for six shows a week in a showroom named after him. Orchestrated by his business partner, Jack Wishna, this "headliner-in-residence" deal was the first of its kind. In 2005, in preparation for the eventual demolition of the casino, the deal was, from all reports, amicably terminated; Newton began a 30-show stint that summer at the Hilton. His last show at the Stardust was on April 20, 2005.[16] During a break in his on stage performance, he announced to the crowd that night he wanted to spend more time with his wife and new daughter as the main reasonings for canceling the contract. Newton said the Boyd family made him a very nice offer to stay on past the demolition of the hotel and casino and to play in other Boyd venues, but Newton declined citing "another deal in the works for Vegas", but he did not mention the Hilton specifically. News crews were expecting this performance to end on time, to make their 10 pm and 11 pm shows, but the show finally ended around 11:30 pm, thus eliminating the possibility. Mr. Las Vegas went on at 7:30 that night, and sang nearly his entire repertoire and songs of other Vegas mainstays as well.

In 2001, Newton succeeded Bob Hope as chairman of the USO Celebrity Circle. In January 2005, Newton started a reality television show on E! called The Entertainer. The winner got a spot in his act, plus a headlining act of their own for a year. And during player introductions at the 2007 NBA All-Star Weekend in Las Vegas, Newton sang Elvis Presley's "Viva Las Vegas."

Newton was the grand marshal of the 80th Annual Shenandoah Apple Blossom Festival in Winchester, Virginia, May 17, 2007.[18] He canceled a sold-out show to join the Festival.

Newton was featured on the 2007 fall season of Dancing with the Stars partnered with two-time champion Cheryl Burke. He became the third contestant to be eliminated from the contest. During the taping (which takes place at CBS Television City), he also became the first guest on The Price Is Right, which tapes next door, under host Drew Carey, who began adding guests to the show, especially to present prizes. Newton appeared after a trip to Las Vegas was shown.

In 2008, Newton received a Woodrow Wilson Award for Public Service. The Woodrow Wilson International Center for Scholars, a national memorial to President Wilson, commemorates "the ideals and concerns of Woodrow Wilson." The award honors leaders who have given back to their communities.

Beginning October 14, 2009, he began performing his newest show "Once Before I Go" at the Tropicana in Las Vegas.[19] Newton performed at the Tropicana for a limited time only - approximately six months.[20] Newton currently performs in various venues worldwide, on a touring basis.[21]

In 1994, Newton married the former Kathleen McCrone, a lawyer from Rocky River, Ohio. The couple have one daughter, Lauren, who was born in 2002.

From 1980 to 1982 Newton was part owner of the Aladdin Hotel, in a partnership that led to a number of lawsuits and a failed attempt by Newton to purchase the entire hotel in 1983.[22]

In 1992, Newton filed for Chapter 11 bankruptcy to reorganize an estimated $20 million in debts, much of which was accumulated while suing NBC for libel; he claimed the network had reported that he partnered with the Mafia to buy the Aladdin. His bankruptcy declaration included a $341,000 Internal Revenue Service tax lien. By 1999, he was financially well off again.[23]

In August 2005, the IRS filed a lawsuit against Newton alleging that he and his wife owed more than $1.8 million in taxes and penalties. One of Newton's tax lawyers disputed that, saying, "We believe the IRS owes him money."[24]

In late 2009, officials at Oakland County International Airport in Waterford, Michigan claimed Newton owed the airport more than $60,000 for unpaid parking fees, which they claimed he owed after having abandoned a $2 million Fokker F28 plane there more than three years before.[24] The plane was originally flown in for renovations in 2005. After they were completed in 2007 the plane was moved to an outside parking area. The monthly parking fee were $5,000. An aircraft of this type needs to have its engines run at least once a month to retain its airworthiness. In 2009 it was discovered that the interior of the craft was rotting, and filled with mold.[25] The plane has since been disassembled, transported, and reassembled on his estate grounds.[26]

In February 2010, Bruton Smith sued Newton claiming Newton was delinquent on a loan he had personally guaranteed and then bought from Bank of America. Smith is seeking foreclosure of Newton's Las Vegas ranch Casa de Shenandoah.[27]

Also in February 2010, Clark County sheriff's deputies and a fleet of moving vans were refused entry to Newton's ranch at E. Sunset and S. Pecos roads. The officers attempted to serve civil papers and seize property as part of a $501,388 judgment against Newton awarded to Monty Ward, his former personal pilot, but security personnel employed by Newton refused to accept the papers. Ward, who filed suit in 2006, won the judgment for past-due wages in January 2009 and since then had attempted to garnish the wages of Newton when he performed at the MGM Grand and later the Tropicana hotel-casino. As of January 27, 2010, the value of the judgment was reportedly growing at a rate of $126.86 per day.[28]

In a 2009 lawsuit, Newton was accused of failing to pay $32,384 for hay delivered to his Las Vegas ranch, presumably for consumption by his horses at the ranch. As of February 27, 2010, the lawsuit was still pending in Clark County District Court, with Newton and his attorneys having filed no response in court.[28]

Newton was enmeshed in another lawsuit over a stalled project to convert his 40 acre home into a museum. In this lawsuit, a developer claimed he purchased Newton's home and paid the singer $19.5 million, with the understanding that Newton would move out and allow the property to be converted into a museum. The developer claimed that he has invested $50 million on the project, but that Newton had failed to move out and had deliberately thwarted construction efforts, including by sexually harassing construction workers.[29] The case was set to go to trial in May 2013.[30]

On Monday, December 17, 2012, U.S. Bankruptcy Court Judge Bruce Markell approved the sale of Wayne Newton's estate, Casa de Shenandoah, to be listed for sale by Nathan and Associates, a Las Vegas brokerage firm. Bankruptcy papers placed the value of the property at $50,800,000.[31]

The road serving the main terminal of McCarran International Airport in Las Vegas is named Wayne Newton Boulevard in his honor.

This article uses material from the article Wayne Newton from the free encyclopedia Wikipedia and it is licensed under the GNU Free Documentation License.

Blue In Green Stewy von Wattenwyl
Update Required To play the media you will need to either update your browser to a recent version or update your Flash plugin.