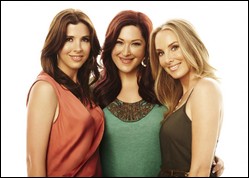 Wilson Phillips is an American vocal group consisting of Carnie Wilson, Wendy Wilson, and Chynna Phillips, the daughters, respectively, of Brian Wilson of The Beach Boys and of John and Michelle Phillips of The Mamas & the Papas.

Their 1990 eponymous debut album sold over 10 million copies worldwide and placed three number-one singles on the Billboard Hot 100, making the trio the best-selling female group at the time. In 1990, the group won the Billboard Music Award for Hot 100 Single of the Year for "Hold On," and in addition was nominated for five Grammy Awards and two American Music Awards.[1]

The Wilson sisters and Phillips grew up together in Southern California in the 1970s and 1980s. The three shared a love of music and songwriting, and developed their own style of vocal harmonies. In 1989, the trio signed with SBK Records. The group is also known for being the offspring of prominent musicians; the Wilsons are the daughters of Brian Wilson of The Beach Boys and Marilyn Rovell of The Honeys, while Phillips is the daughter of John and Michelle Phillips of The Mamas & the Papas. Wilson Phillips released their debut album, Wilson Phillips, in 1990. Their debut single, "Hold On," hit number one on the U.S. Billboard Hot 100 chart on June 9, 1990, bumping Madonna's "Vogue" off the top spot.[2] The single was also number one on the US Billboard Adult Contemporary and became a worldwide hit, peaking at number two in Australia, number six in the UK, number seven in Ireland, number 10 in Sweden, and number 15 in the Netherlands, Germany, and Switzerland.[3] The single also won Wilson Phillips the Billboard Music Award for Hot 100 Single of the Year for 1990.[4] The second and fourth singles from the album also became number-one singles on the Billboard Hot 100: "Release Me" (two weeks) and "You're in Love" (one week). The singles "Impulsive" and "The Dream Is Still Alive", peaked at number four and number 12, respectively, on the Hot 100.[5]

In 1991, they contributed a recording of "Daniel" to the tribute album Two Rooms: Celebrating the Songs of Elton John & Bernie Taupin. While not released as a single, it peaked at number seven in the US Adult Contemporary chart due to strong radio airplay. They also released the song "You're in Love" the same year, which scored as the number one (and to date, their last top-10) pop single.[6] In 1992, Wilson Phillips also made history as Billboard declared their debut album the best-selling album of all time by an all female group, peaking at number two on the Billboard 200 album chart, and selling over 5 million copies in the US and over 10 million copies worldwide, which also made Wilson Phillips, at the time, the best-selling female group of all time for a single album, breaking the previous record set by The Supremes.[7]

In June 1992, Wilson Phillips released their second album, Shadows and Light. The album was deeply personal and adopted a more serious tone, with tracks exploring issues such as child abuse ("Where Are You") and their estrangement from their fathers ("Flesh and Blood", "All the Way From New York"). The first single, "You Won't See Me Cry" peaked at number 20 in the US and number 18 in the UK, the first time they had a higher-ranking single in the UK than in the US. The album peaked at number four on the Billboard 200 and was certified platinum in the US, and double platinum in Canada. Shortly after the release of Shadows and Light in 1992, Chynna Phillips announced plans for a solo career, and the group decided to disband.[8]

During the next decade, the group went their separate ways. In 1993, Wendy and Carnie Wilson released the Christmas holiday-themed album, Hey Santa!, a collection of classic holiday themes with an original song (the title track). In 1995, Chynna Phillips released a solo album, Naked and Sacred. The same year, Carnie went on to host her own short-lived syndicated television talk show titled, Carnie!.[9] In 1997, Carnie and Wendy, along with their father Brian Wilson, released The Wilsons and the single "Monday Without You."[10] Capitol Records released the compilation Greatest Hits in 2000, although the group did not officially reunite for the release. On March 29, 2001, they reunited to perform The Beach Boys' song "You're So Good to Me" at a tribute show to Brian Wilson held at New York's Radio City Music Hall. Chynna Phillips dedicated the performance to her own father John Phillips, who had died a few days earlier.

Wilson Phillips reunited in 2004 to release California, an album of cover songs. A single, "Go Your Own Way," a song originally recorded by Fleetwood Mac, peaked at number 13 on the Billboard Adult Contemporary chart. The album debuted at number 35 on the Billboard 200 chart with 31,000 copies sold in its first week of release. In New Zealand, the album was a surprise hit, reaching the top 10 and amassing gold sales after "Go Your Own Way" topped the country's adult contemporary radio chart for several weeks.[11]

On October 12, 2010, Wilson Phillips released a new Christmas album, Christmas in Harmony. The album yielded a single, "I Wish It Could Be Christmas Everyday," a cover of the popular seasonal tune that first was a hit in 1973 for English glam-rock band Wizzard. The band appeared in a cameo and performed "Hold On" in the film Bridesmaids (2011).[12][13][14] Bandmember Chynna Phillips was a contestant on season 13 of ABC's Dancing With the Stars and explained that "Hold On" was written by bandmates Carnie and Wendy Wilson and her about Phillips' recovery from drug and alcohol addiction. Phillips was eliminated after week four.[15]

On March 20, 2012, the group appeared on QVC to promote their release Dedicated (2012), a new studio album composed of covers of songs by both The Beach Boys and The Mamas and the Papas. On April 3, 2012, the group released Dedicated, which peaked at number 29 on the Billboard 200 chart.[16] The trio appeared in their own reality show, Wilson Phillips: Still Holding On, which debuted on TV Guide Network in April 2012.[17] In 2015, Wilson Phillips contributed backup vocals to the song FourFiveSeconds by Rihanna, Kanye West and Paul McCartney for Rihanna's eighth studio album.[18]

In July 2016, Wilson Phillips reunited and performed on ABC's Greatest Hits.[19] In 2017, the group performed on the season finale of NBC's The New Celebrity Apprentice.[20]

This article uses material from the article Wilson Phillips from the free encyclopedia Wikipedia and it is licensed under the GNU Free Documentation License.