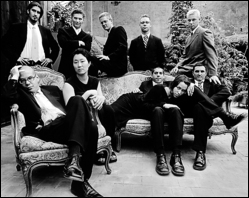 Pink Martini is a musical group that was formed in 1994 by pianist Thomas Lauderdale in Portland, Oregon. Members of the band call it a little orchestra that crosses the genres of classical music, classic pop, Latin music, and jazz.[1] The co-lead vocalists for Pink Martini are China Forbes[2] and Storm Large.

Thomas Lauderdale worked in politics in 1994 in his hometown of Portland, Oregon. He considered the music at most fundraisers loud and boring. He founded Pink Martini as a remedy, crossing the genres of jazz, classical music, and traditional pop to appeal to a broad audience. During the following year, he called China Forbes, a classmate from Harvard, and invited her to join the band. Their first single, "Sympathique", was nominated for Song of the Year at the Victoires de la Musique Awards in France.

Forbes is monolingual but sings in 15 languages. "All of us in Pink Martini have studied different languages as well as different styles of music from different parts of the world," says Lauderdale. "So inevitably, our repertoire is wildly diverse. At one moment, you feel like you're in the middle of a samba parade in Rio de Janeiro, and in the next moment, you're in a French music hall of the 1930s or a palazzo in Napoli. It's a bit like an urban musical travelogue. We're very much an American band, but we spend a lot of time abroad and therefore have the incredible diplomatic opportunity to represent a broader, more inclusive America… the America which remains the most heterogeneously populated country in the world… composed of people of every country, every language, every religion."[3] Featuring 10–12 musicians, Pink Martini performs its multilingual repertoire on concert stages and with symphony orchestras throughout the world.

Pink Martini made its European debut at the Cannes Film Festival in 1997 and its orchestral debut with the Oregon Symphony in 1998 under the direction of Norman Leyden. Since then, the band has gone on to play with more than 50 orchestras around the world, including multiple engagements with the Los Angeles Philharmonic at the Hollywood Bowl, the Boston Pops, the National Symphony at the Kennedy Center, the San Francisco Symphony, and the BBC Concert Orchestra at Royal Albert Hall in London.

Other appearances include the grand opening of the Los Angeles Philharmonic's Frank Gehry-designed Walt Disney Concert Hall, with return sold-out engagements for New Year's Eve 2003, 2004, 2008 and 2011; two sold-out concerts at Carnegie Hall; the opening party of the remodeled Museum of Modern Art in New York City; the Governor's Ball at the 80th Annual Academy Awards in 2008; the opening of the 2008 Sydney Festival in Australia; two sold-out concerts at Paris' legendary L'Olympia Theatre in 2011; and Paris' fashion house Lanvin's 10-year anniversary celebration for designer Alber Elbaz in 2012 In its twentieth year, Pink Martini was inducted into both the Hollywood Bowl Hall of Fame and the Oregon Music Hall of Fame.

On New Year's Eve 2005, Pink Martini performed live at the Arlene Schnitzer Concert Hall in Portland, Oregon. This performance was aired live on National Public Radio's Toast of the Nation, and in partnership with Oregon Public Broadcasting was recorded for a live DVD and later broadcast on US public broadcasting and French television. The DVD has been re-released to retail as Discover the World: Live in Concert, featuring not only the full concert, but several vignettes and a short documentary of the band's history.

In December 2010 the band performed "We Three Kings" on The Tonight Show with Jay Leno and returned in December 2011 to perform "Santa Baby."[6]

In February 2011, China Forbes, recorded a video greeting to the European Space Agency's Italian astronaut, Paolo Nespoli, and Russian cosmonaut Aleksandr Kaleri, on board the International Space Station. The astronauts were preparing to oversee the docking of ESA's Automated Transfer Vehicle (ATV) cargo vessel, Johannes Kepler, which took place at 17:08 CET on 24 February.[7] The greeting was set to the soundtrack of Dosvedanya Mio Bombino—one of Pink Martini's signature songs—and was mixed with footage of the docking.

Pink Martini's debut album Sympathique was released independently in 1997 on the band's own label, Heinz Records (named after Lauderdale's dog), and became an international phenomenon, garnering the group nominations for "Song of the Year" and "Best New Artist" in France's Victoires de la Musique Awards in 2000.

Pink Martini released Hang On Little Tomato in 2004, Hey Eugene! in 2007 and Splendor in the Grass in 2009. In November 2010 the band released Joy to the World, a festive, multi-denominational holiday album featuring songs from around the globe. Joy to the World received glowing reviews and was carried in Starbucks stores during the 2010 and 2011 holiday seasons. All five albums have gone gold in France, Canada, Greece, and Turkey and have sold well over 2.5 million copies worldwide.

In Fall 2011 the band released two albums: A Retrospective, a collection of the band's most beloved songs spanning their 17-year career, which includes eight previously unreleased tracks, and 1969, an album of collaborations with Japanese singer Saori Yuki. 1969 has been certified platinum in Japan, reaching No. 2 on the Japanese charts. On September 24, 2013 the band released their seventh studio album Get Happy. On March 4, 2014, they released Dream a Little Dream with the von Trapps.

Pink Martini's songs appear in the films In the Cut, Nurse Betty, Josie and the Pussycats,Tortilla Soup, Hitch, Shanghai Kiss, Mary and Max, and Mr. & Mrs. Smith and have been used on the television shows Dead Like Me, The Sopranos, The West Wing, Castle, Sherlock, Parks and Recreation, and Scream Queens. Their song Una notte a Napoli is an integral part of the Italian movie Mine Vaganti (2010) by Italian-Turkish director Ferzan Özpetek.

In August 2014, Derek Rieth was found dead of a self-inflicted gunshot wound to the head in what was ruled a suicide.[8][9] In his honor, the band established the Derek Rieth Foundation with the goal of "Empowering Youth Through Music and Dance".[10]

This article uses material from the article Pink Martini from the free encyclopedia Wikipedia and it is licensed under the GNU Free Documentation License.