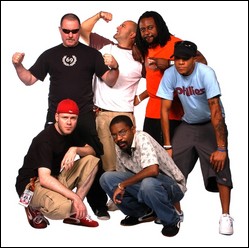 They have released nine studio albums most of them on Moon Ska Records. The Toasters experienced a small degree of commercial success in the late 1990s due to the popularity of third wave ska in North America. Their song "Two-Tone Army" is also the theme song for the Nickelodeon show KaBlam! (credited as the Moon Ska Stompers) and they recorded background music in many TV commercials, including for America Online and Coca-Cola. Their song "Don't Let The Bastards Grind You Down" appeared in the pilot episode of the animated series Mission Hill. They still perform around the world, and in 2007 they celebrated their 25th Anniversary with a new studio album, One More Bullet.[1]

This article uses material from the article The Toasters from the free encyclopedia Wikipedia and it is licensed under the GNU Free Documentation License.