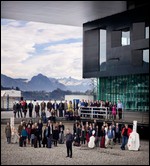 The King's Consort is a prominent British period music orchestra founded in 1980 by the English conductor and harpsichordist Robert King (b. 1960, Wombourne).[1] The ensemble has an associated choral group, Choir of The King's Consort. Together, they have made over 90 recordings, largely on the Hyperion label, and sold over 1,000,000 discs.[2] The orchestra performs concert seasons in the UK and tours internationally.

Their repertoire is primarily from the baroque and early classical periods but has also included late 19th century repertoire as well as contemporary commissions by Michael Finnissy and, more recently, Michael Berkeley and includes recordings and live performances of opera and instrumental music. The ensemble's main performing base has been in London's Wigmore Hall from 1987, and the larger Cadogan Hall for performances that required both the orchestra and the choir. The King's Consort have performed seven times at the BBC Proms including The Coronation of King George II a special programme to celebrate the Golden Jubilee of Queen Elizabeth II (2002), Monteverdi's Vespers of 1610 (2004), Michael Haydn's Requiem Mass and Mozart's Coronation Mass (2006).

The King's Consort Choir appears on the sound tracks of several films, including The Chronicles of Narnia: The Lion, the Witch and the Wardrobe, Kingdom of Heaven, Pirates of the Caribbean: Dead Man's Chest and The Da Vinci Code.[3]

Amongst their awards was the 2006 BBC Music Magazine Choral Award for their recording of Michael Haydn's Requiem Mass. [4]

In June 2007, harpsichordist Matthew Halls temporarily took over as the group's Artistic Director from Robert King, who was jailed for indecent assault.[5] On 1 May 2009, a new group directed by Halls (consisting of some of the then-current players, singers and soloists of The King's Consort) was launched under the new name, Retrospect Ensemble, following a decision by The King's Consort Board of Trustees.[6] The name "The King's Consort" had been temporarily licensed to Halls's group but in 2009 reverted to Robert King.[7]

This article uses material from the article The King's Consort from the free encyclopedia Wikipedia and it is licensed under the GNU Free Documentation License.

Time Was George Robert & Phil Woods
Update Required To play the media you will need to either update your browser to a recent version or update your Flash plugin.