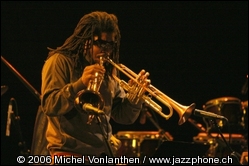 The Art Ensemble of Chicago is an avant-garde jazz ensemble that grew out of Chicago's AACM in the late 1960s. The group continues to tour and record through 2006, despite the deaths of two of the founding members.

The Art Ensemble is notable for its integration of musical styles spanning jazz's entire history and for their multi-instrumentalism, especially the use of what they termed "little instruments" in addition to the traditional jazz lineup; "little instruments" can include bicycle horns, bells, birthday party noisemakers, wind chimes, and a vast array of percussion instruments (including found objects). The group also uses costumes and face paint in performance. These characteristics combine to make the ensemble's performances as much a visual spectacle as an aural one, with each musician playing from behind a large array of drums, bells, gongs, and other instruments. When playing in Europe in 1969, the group was using more than 500 instruments.[1]

Members of what was to become the Art Ensemble performed together under various band names in the mid-sixties, releasing their first album, Sound, as the Roscoe Mitchell Sextet in 1966. The Sextet included saxophonist Roscoe Mitchell, trumpeter Lester Bowie and bassist Malachi Favors Maghostut, who over the next year went on to play together as the Roscoe Mitchell Art Ensemble. In 1967 they were joined by fellow AACM members Joseph Jarman (saxophone) and Phillip Wilson (drums), and made a number of recordings for Nessa.

As noted above, the musicians were all active multi-instrumentalists: Jarman and Mitchell's primary instruments were alto and tenor saxes, respectively, but they played many other saxophones (ranging from the tiny sopranino to the large bass), flutes and clarinets. In addition to trumpet, Bowie played flugelhorn, cornet, shofar and conch shells. Favors added touches of banjo and bass guitar. Over the years, most of the musicians dabbled on piano, synthesizer and other keyboards.

In 1969, Wilson left the group to join blues singer/harmonica player Paul Butterfield's band. That same year, the remaining group travelled to Paris,[2] where they became known as the Art Ensemble of Chicago. The immediate impetus for the name change came from a French promoter who added "of Chicago" to their name for purely descriptive purposes, but the new name stuck because band members felt that it better reflected the cooperative nature of the group. In Paris the ensemble were based at the Théâtre des Vieux Colombier [3] and their distinctive music with percussion roles dispersed throughout the quartet was documented in a range of records on the Freedom and BYG labels. They also recorded "Comme à la radio" with Brigitte Fontaine and Areski Belkacem as a drummerless quartet before welcoming percussionist Famoudou Don Moye to the group in 1970.

In 1970 the ensemble recorded Art Ensemble of Chicago with Fontella Bass and Les Stances a Sophie with singer Fontella Bass, then Lester Bowie's wife. The latter was the soundtrack from the French movie of the same title. Bass' vocals, backed by the powerful pulsating push of the band has allowed the "Theme De YoYo" to remain an underground cult classic ever since.

The ensemble returned to the United States in 1972, and the quintet of Mitchell, Jarman, Bowie, Favors and Moye remained static until 1993. Upon their return to the States, they came to prominence with two major releases on Atlantic Records: Bap-Tizum and Fanfare for the Warriors. Members of the group made the decision to restrict their appearances together, allowing each player to pursue other musical interests. It seems likely that this has contributed to the longevity of the ensemble. Despite the self-imposed limitations the Art Ensemble managed to release more than 20 studio recordings and several live albums between 1972 and 2004.

The makeup of the ensemble changed in 1993, when Jarman retired from the group to focus on his practice of Zen and Aikido. Bowie died of liver cancer in 1999, and the group continued as a trio (featuring a number of guest artists in their performances) until 2003, when Jarman rejoined the ensemble. In January 2004 Favors Maghostut died suddenly during the recording of Sirius Calling. The group was joined in late 2004 by trumpeter Corey Wilkes and bassist Jaribu Shahid, who recorded the 2 CD live release Non-Cognitive Aspects of the City (2006) on Pi Recordings.

Ensemble members embrace the performance art aspects of their concerts, believing that they allow the band to move beyond the strict limits of "jazz". Their operating motto is "Great Black Music: Ancient To the Future", which allows them to explore a wide variety of musical styles and influences; the band's distinctive appearance on stage also reflects this motto. As Jarman describes it,

This article uses material from the article Art Ensemble of Chicago from the free encyclopedia Wikipedia and it is licensed under the GNU Free Documentation License.