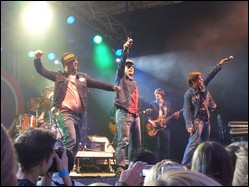 Fettes Brot is German for fat bread. "Fett" is a German slang term for "excellent" and brot is slang for "hash". The band took the name from a fan who called them "Fettes Brot" after an early gig, which was probably meant as a compliment, but the members considered it so bizarre that they took it as the name for their new group. Fettes Brot's longevity has meant that it is sometimes referred to as "Hamburg's hip-hop-dinosaurs" by its members.

Success with Nordisch by Nature and Jein

When the group Poets of Peeze disbanded in 1992, its members Dokter Renz (Martin Vandreier né Schrader) and Tobi Tobsen together with König (king) Boris (Boris Lauterbach), Schiffmeister (Björn Warns) and Mighty founded the band Fettes Brot. The Schmidt brothers (Tobi & Mighty) left the newly founded band early on, to pursue other projects, so the band released their first album, the EP Mitschnacker on Yo Mama Records, as a trio. Prior to Mitschnacker the songs Schwarzbrot- Weißbrot (Blackbread - Whitebread) and Schule der Gewalt (School of Violence) appeared on the sampler, Endzeit 93, from the Independent record label Wilde Welt Records.

Commercial success first came with the single Nordisch by Nature ("Nordic by Nature") and its album. The song begins with the sound of a foghorn and is performed in parts in "Hamburger Platt" (Hamburg Low) north German dialect, a strong Low German accent, and Danish (perhaps a paean to the Danish minority in the north German state of Schleswig-Holstein), which makes the song something of an anthem for persons from Northern Germany. The single remained in the German charts for a full month and the band was determined not to let this commercial success make them become something like a one hit wonder. The group demonstrated their technical maturity with their first LP Auf einem Auge blöd ("Stupid on one eye", a parody of the phrase Auf einem Auge blind meaning "Blind in one eye"), which boasts versatile and humorous lyrics. The narrated stories and interwoven lines of their rapping were received very well.

A year later Fettes Brot released their second biggest commercial hit and quasi-anthem Jein (a portmanteau of Ja and Nein, meaning both "Yes" and "No"). The main line of the song's chorus asks the sticky question: Soll ich's wirklich machen oder lass ich's lieber sein? ("Should I really do it or should I let it go?") and established a strong fanbase in German speaking countries. Further singles from the following album Außen Top Hits, innen Geschmack (a play on a popular commercial jingle for the aluminum foil Toppits: "Außen Toppits - innen Geschmack" (Toppits on the outside - flavor within) where the like-sounding Album title means "Top hits on the outside - flavor within") were just as successful. The rapper Dendemann (then a member of the Arme Ritter, meaning "Poor Knights" but also "French toast") had his first introduction to the mainstream in his collaboration track, Wildwechsel, also with Max Herre, Blumentopf, Spax (German) and Der Tobi & das Bo (German) which became representative of these artists. Fettes Brot were at this time very active in other areas, for instance, they created a unique radio transmission called Forellentee for Radio Fritz (German).

After the end of 1998, with the single Können diese Augen lügen? ("Can these Eyes Lie?") and its corresponding album Fettes Brot lässt grüßen ("Fettes Brot Says Hello") 1999, it was somewhat quiet for the Trio. Many purists voiced criticism as the band explored new paths, no longer focussed on pure Hip Hop music style. Viele Wege führen nach Rom ("Many Roads Lead to Rome") and Lieblingslied ("Favourite Song" (and semantically synonymous to "Darlings's Song")) were successful as a combined single which turned out to become a hit even bigger than both previous albums. With the cooperation of James Last, the three said goodbye to writing tunes in 1999, and embarked on a creative pause. This pause was relieved for their fans with the publishing of an anthology of B-sides, remixes, and some exclusive material. Beginner, and Smudo of the Fantastischen Vier (Fantastic Four) as well as Der Tobi & Das Bo made personal contributions on this anthology. Furthermore, the widely successful single Da draußen ("Out there") was released for collectors in 2000.

After three years, in 2001, the fourth regular Fettes Brot album was released. The trio marketed a small comeback with the title Demotape using new alternative pseudonyms. The hit singles Schwule Mädchen and The Grosser could not be clearly categorized into a musical style. Then against this they released a collaboration with Skunk Funk (German) the pure Hip Hop single Fast 30 ("Almost 30"). Only a year later, in early 2002 they released their Greatest Hits Compilation Amnesie ("Amnesia") and a like-named DVD with extra short films. Three more singles appeared, beginning in 2002 with Welthit ("World Hit"), found on their Greatest Hits CD. In 2003 they released the Rio Reiser cover Ich bin müde ("I Am Tired"), written by Reiser and Wolfgang Michels (German) for Michels' 1983 album Keine Probleme ("No Problems"), which received heavy rotation on television. They made the collaboration Tanzverbot ("Dancing Prohibition") available as a legal MP3 download (as well as a limited CD and Vinyl run), as part of the Hamburg Bambule (German) protest alongside Bela B. (German) against the Hamburg senator Ronald Schill.

Comeback and their own record label

With their Comeback! of 2005, Fettes Brot won second place in the Bundesvision Song Contest with the Song Emanuela. A few days later on Valentines day this single went up to third place on the singles charts. On May 21, 2005 their most successful album to date appeared, Am Wasser gebaut ("Built by the water", but also a term describing a very emotional person who cries easily). This was not so much a rap album like their previous ones, as it was more of a soul record.

The second single from Am Wasser gebaut was An Tagen wie diesen ("On days like this"), working with Pascal Finkenauer (German). Its video, in which Finkenauer and Dj exel. Pauly (German) appear, depicts the activities of an ordinary day. It is ordinary, except armoured tanks drive through the streets as if they were cars, and the people take little notice of them.

On October 6, 2005, the three rappers for the first time won the Comet Award (German) twice at once. They won both the category for "Best Band" and for "Best Song" (Emanuela). They were also nominated for "Best Video" and "Most Successful Download" (Emanuela).

On December 22, 2005, the Fettes Brot gave the largest concert of their careers at the Color Line Arena in Hamburg for over 13,000 people. The concert was televised by MTV and numerous radio stations (e.g. Radio Fritz) broadcast it live.

Fettes Brot has sometimes used the pseudonym D.O.C.H.! ("doch" is a German word meaning "yet", "to the contrary", and "but", amongst other things - most often, though, it means an emphatic, "damn right!" or "oh yes!") to publish songs which would not be suitable for the Hip Hop genre (compare Sascha Schmitz's alias, Dick Brave). This began with a big PR gag: in January 2006, Fettes Brot announced that they had signed the "Power pop" band D.O.C.H.! to their label. The band was to consist of three 17-year-old Berliners named Boy, Paolo, and Typ. News followed promising a first single and a Hungarian tour in April, and the release of an album in September. As the single Was in der Zeitung steht ("What's in the news") hit radio and television for the first time, a distinct similarity to the B-side of the An Tagen wie diesen single was noticed. (Doktor Renz had sung both songs.) After this, fans began to suspect the photos on the band's website were counterfeit. An announcement was made on MTV's TRL program, May 9, that the three members of D.O.C.H.! had accused Fettes Brot of having stolen their song (but the announcement was definitely made up by Fettes Brot).

In 2006, Fettes Brot released a single named Fussball ist immer noch wichtig ("Soccer is still important") for the 2006 FIFA World Cup, but because of the German Soccer Boom (Germany made it much farther than most Germans expected), not many people recognize this song. They also released 'Falsche Entscheidung' in 2006 for the World Cup, with a video featuring the retired footballers Boris Amadeus and Stefan Bach. Luckily they were huge fans of the band and so appeared without any fees. After extensive touring in 2005 and 2006, Fettes Brot worked in 2007 on a new Album. In December, they held several small secret concerts under the name "Bette Frost" and played the new songs. On January 1, 2008 they unveiled the new single Bettina, zieh dir bitte etwas an ("Bettina, please put on some clothes!"), but at the time, the song was known as Bettina, pack deine Brüste ein ("Bettina, tuck your boobs away"), since Fettes Brot had changed it at the last minute. The song is about the German model Bettina Ballhaus, who at this time hosted a late night quiz show, and with every question answered correctly, she took some of her clothes off. She also happened to unveil her breasts, hence the title of the song. However, before the single came out, Bettina Ballhaus left the show. Fettes Brot released this single on February 15, 2008. They also have stopped making soul music and have gone back to the "old" Fettes Brot, making Partysongs and Rap.

Björn Warns took the name Schiffmeister from the classic computer game Pirates!. In that game when his pirate ship suffered a mutiny, an announcement came up starting with the English words "Shipmaster Warns: ...". The German language does not have a direct equivalent for "Shipmaster" ("Kapitän" is used instead, like the English "Captain"), but when Warns translated it he made up the word "Schiffmeister". Schiffmeister also means "pissmaster" in German.

This article incorporates information from the revision as of July 30, 2006 of the equivalent article on the German Wikipedia.

This article uses material from the article Fettes Brot from the free encyclopedia Wikipedia and it is licensed under the GNU Free Documentation License.