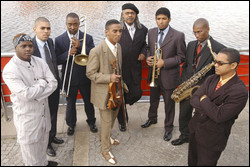 The Afro-Cuban All Stars is a unique orchestra that has always been devoted to promoting the full range of Cuban music, one that embraces several generations and all musical styles. Over the years many of the bands musicians have become international stars, including brilliant performers such as Rubén González, Ibrahim Ferrer, Guillermo Rubalcaba, and Manuel "The Guajiro" Mirabal.

The genesis of the Afro-Cuban All Stars has its roots early in the 1990s. At this time the son ensemble Sierra Maestra, headed by Juan de Marcos, received a lot of international exposure. As a consequence, de Marcos was introduced to Nick Gold, president of World Music Records (at that time a small independent world music label). That encounter led to a couple of very successful tours in Europe. Later the group went to London and recorded Dundumbanza, considered one of the jewels of the world music scene of the early 90s. (In retrospect, this recording opened the doors to the further incredible boom of the traditional Cuban music of the period.)

Months later, de Marcos got the go-ahead to do an album celebrating the classic Cuban sound of the 50s a recording whose personnel would feature many great musicians that de Marcos knew. An agreement reached, the plan was to prepare two projects: one featuring a Cuban big band, the other record favoring a more traditional sound reminiscent of the acoustic style of Nico Saquito or Portabales.

In March 1996 they recorded the album A toda Cuba le Gusta, featuring nearly 60 performers. Then, with the addition of celebrated artists such as Compay Segundo, Omara Portuondo, Eliades Ochoa, and American guitarist Ry Cooder, what became the legendary Buena Vista Social Club CD was recorded. Finally, with low budget and only during two live sessions and with simple orchestrations carried out at the studio by de Marcos, they also recorded the first solo album of Rubén González, Introducing Ruben Gonzalez. This was destined to be one of the most successful of the Buena Vista series of recordings.

During the spring of 1997 and along with the release in Europe of the three albums, de Marcos and a select group of stellar musicians started touring all over the continent under the banner of a band christened the "Afro-Cuban All Stars." The original line up, familiar from the records, included Ruben González and Guillermo Rubalcava (piano), Orlando López (bass), Amadito Valdés (timbale), Carlos González and Roberto Valdés (bongos & Cuban percussion), Ángel Terry (congas), Daniel Ramos, Alejandro Pichardo y Guajiro Mirabal (trumpets), Alberto Molote Martínez and Jesús Aguaje Ramos (trombones) and, Raúl Planas, Manuel Licea, Pío Leiva, Ibrahim Ferrer and Félix Baloy (lead singers).

After several years of tremendous and unexpected success including four Grammy nominations, being the subject of several documentaries and films, and being recipients of many other distinctions the All Stars are certainly the best-known and successful Cuban orchestra after Los Van Van and Irakere.

The Afro-Cuban All Stars has also opened the doors to a new generation by incorporating young musicians into the band. With The Afro-Cuban All Stars, de Marcos has developed a concept more so than simply creating a band. His approach has allowed him to expand its creative range by incorporating contemporary styles of Cuban music; as well, a fluid approach to adjusting the orchestras line-up by changing or adding musicians as appropriate has made it easier to reflect the different styles of music from the various periods that the band features. The Afro-Cubans are the same orchestra that can be seen in those distinct performances captured in the famous Oscar-nominated Buena Vista Social Club documentary by Wim Wenders, the Tony Knox documentary Salon of Dreams, or the DVDs Live in Japan or Live in The Hague.

In 2002, de Marcos founded his own independent label, DM Ahora! Records, with which he released the Afro-Cuban All Stars albums Live in Japan and Step Forward (which was Grammy nominated in 2006). He also released A Diario (Telmary) and Goza Pepillo (Interactivo), projects that represent a new generation of Cuban music, one that fuses hip-hop with contemporary Cuban genres. More recently de Marcos, along with his wife Gliceria Abreu, has founded, GG and LL, a musical production company based in Mexico City that aims to create a space for the new Latin American Music, especially that interpreted by songwriters.

The recent plans for the Afro-Cuban All Stars include the recording of the albums Breaking the Rules and Step Backward. This documents de Marcos latest project, where he has gathered the most remarkable expatriate Cuban musicians from around the world. This new version of the Afro-Cuban All Stars started touring internationally from February 2009 and its debut was in the United States, Singapore and Canada.[1]

This article uses material from the article Afro-Cuban All Stars from the free encyclopedia Wikipedia and it is licensed under the GNU Free Documentation License.

Cubano Chant Ray Bryant
Update Required To play the media you will need to either update your browser to a recent version or update your Flash plugin.