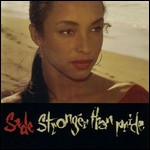 Sade (pronounced IPA: /de/ shah-DAY-') are an English band that formed in 1983. The band's music features elements of R&B, soul, jazz, and soft rock. The band is named after their British Nigerian lead vocalist, Sade Adu.

Sade's debut album, Diamond Life, went Top Ten in the U.K. in late 1984 and sold platinum. In 1986, Sade won a Grammy for Best New Artist. Sade's US certified sales so far stands at 23.5 million units according to Recording Industry Association of America (RIAA),[1] and has sold more than 50 million units worldwide to date. They were ranked at #50 on VH1's list of the 100 greatest artists of all time.[2]

Sade were formed in 1982, when members of a Latin soul band Pride Sade Adu, Stuart Matthewman, and Paul Spencer Denman together with Paul Anthony Cook formed a break-away group and began to write their own material. In 1983, Andrew Hale joined the band, though Cook left in 1984. Sade, named after their lead singer, made their debut in December 1982 at Ronnie Scott's Club in London, in support of Pride. In May 1983, the band performed their first US show at Danceteria Club in New York City. Sade received more attention from the media and record companies than Pride and finally separated. On 18 October 1983, the band signed with Portrait Records. All Sade albums were released through this label until it was absorbed by its parent label Epic Records in 1986.

On 25 February 1984, Sade released their first UK single "Your Love Is King". Their debut album Diamond Life was released on 28 July 1984 in the United Kingdom, where it peaked at #2 and was later certified 4x Platinum by the BPI. The band embarked on their first major UK tour, augmented by Dave Early (drums), Martin Ditcham (percussion), Terry Bailey (trumpet) and Gordon Matthewman (trombone). On 8 December 1984, the band released their first U.S. single "Hang on to Your Love", with the Diamond Life album following on 23 February 1985. Also in 1985, Sade won a BPI "Brit Award" for "Best Album". A third single, "Smooth Operator", was released from the album with a video directed by Julian Temple. It was nominated for two MTV Video Music Awards"Best Female Video" and "Best New Artist". On 13 July 1985, Sade performed at the Live Aid at Wembley Stadium in London. Sade Adu became the only African-born artist to appear in front of the live audience of 75,000, and an estimated worldwide television audience of 1.4 billion in 170 countries.

On 16 November 1985, Sade released their second album Promise in the United Kingdom (released in the US on 21 December 1985). The album peaked at no.1 both in the UK and the US; it was certified double Platinum by the BPI in the UK, and quadruple Platinum in the US. In 1986, Sade Adu was nominated for an American Music Awards for Favorite Soul/R&B Female Video Artist and won a Grammy Award for Best New Artist. In late 1985, Sade went on their first world tour to promote Promise. Augmenting the band were Dave Early (drums), Martin Ditcham (percussion), Gordon Matthewman (trumpet), Jake Jacas (trombone & backing vocals), Leroy Osbourne (vocals) and Gordon Hunte (guitar). On 28 June 1986, the band performed at the Artists Against Apartheid Concert in the Freedom Festival on Clapham Common in London. In 1987, the band were nominated for a Grammy Award for Best R&B Vocal Performance by a Duo or Group for Promise.

On 14 May 1988, Sade released their third album Stronger Than Pride in the United Kingdom (released in the US on 4 June 1988). The album peaked at number 3 in the UK and has been certified Platinum by the BPI. It was preceded by the single "Paradise" which made the UK top 30 (and top 20 in the US). The band toured across the world again, augmented by Blair Cunningham (drums), Martin Ditcham (percussion), Leroy Osbourne (vocals), Gordon Hunte (guitar), James McMillan (trumpet) and Jake Jacas (trombone & vocals).

In 1989, Sade Adu was nominated for an American Music Award for Favorite Soul/R&B Female Artist.

Sade released their fourth album Love Deluxe on 11 November 1992 in the U.K. and November 21 in the US. The album peaked at number 3 on the US Album charts and was certified Quadruple-Platinum (4x),[3] but stalled at no.6[4] on the UK charts before being certified Gold[5] by the BPI.

The 1994 Grammy for Best R&B Performance by a Duo or Group was awarded to Sade for "No Ordinary Love", featured in the 1993 film Indecent Proposal. In November, the group released their first compilation album, The Best of Sade. The album hit shelves on 12 November in the UK and on 26 November 1994 in the US, where it peaked at number 9 on Billboard's Album Chart[6] and was certified Quadruple-Platinum.[7]

In 1996, Hale, Denman, and Matthewman formed their own band as a side project, Sweetback, and released their self-titled first album.

In October 2000 Sade famously came out of retirement to perform at the prestigious MOBO Awards. Her appearance at the MOBO Awards ceremony was her first live performance since the early nineties and started a wave of speculation that a possible Sade comeback was in the cards. On 13 November 2000, Sade released their fifth studio album Lovers Rock in the United Kingdom (released the day after in the US). Their first album in eight years, Lovers Rock peaked at number 18 in the UK (their only studio album not to make the top 10) though was certified Gold by the BPI. It fared better in the US, peaking at number 3. It also won the Grammy Award for Best Pop Vocal Album in 2002.

The band toured the US throughout 2001. The tour resulted in a live album, Lovers Live, which was released in the UK and US in February 2002.

In 2005, the band contributed the track "Mum" to the Voices for Darfur DVD.

The title track to Soldier of Love was released on the website and debuted on radio stations on 8 December 2009.[8]

After moving 502,000 copies, the album topped the Billboard 200 chart during its debut week. The album is the band's first number 1 album since the 1986 Promise, which was number 1 on the Billboard charts for two consecutive weeks. The group released the second single from the album, "Babyfather", in April 2010, followed by a video in May.

The band performed the first single from their new album on UK's Friday Night with Jonathan Ross on 26 February 2010.

On 13 April 2010, the band performed "Babyfather" and "The Sweetest Taboo" on US' Dancing With The Stars. In September 2010, the group announced the first dates of their global tour, Sade Live to begin in April 2011.[11]

In 2011, Sade received their fourth Grammy Award (Grammy Award for Best R&B Performance by a Duo or Group with Vocals) for Soldier of Love and released their second greatest hits album, The Ultimate Collection. On Friday 8 July 2011, they premiered their new music video "Love Is Found".

Main article: List of awards and nominations received by Sade

This article uses material from the article Sade (band) from the free encyclopedia Wikipedia and it is licensed under the GNU Free Documentation License.