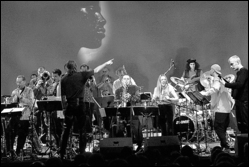 The Vienna Art Orchestra was a European jazz group based in Vienna, Austria. Organized at different times as either a big band or as a smaller combo, it was regarded as one of the leading European jazz ensembles and was an official cultural ambassador of the Republic of Austria.

Founded in 1977 by director and composer Mathias Rüegg, the band started out by performing Rüegg's distinctive postmodern compositions on stages throughout Europe. Among the founding musicians were saxophonists Wolfgang Puschnig and Harry Sokal, singer Lauren Newton, and tuba player Jon Sass. In 1980, the ensemble signed a recording contract with the Swiss hatART label, and in 1984 it toured the United States for the first time.

The group essentially disbanded for a brief period at the end of the 1980s. In 1992, the VAO opened a new phase with a smaller complement of musicians. The band played fewer of Rüegg's compositions and concentrated on arrangements of works by Duke Ellington, Charles Mingus, and other noted American jazz composers, as well as music inspired by the classical music of Verdi, Wagner, Schubert, and Erik Satie.

In 1997, the ensemble's personnel changed once again, increasing in size and adding younger musicians. New compositions by Rüegg became a regular feature of VAO concerts, which often included visual and dramatic elements.

The ensemble was nominated for an Amadeus Austrian Music Award in 2001 for the album All That Strauss, and again in 2003 for Art and Fun.

On July 10, 2010, Mathias Rüegg announced that the Vienna Art Orchestra had been disbanded for financial reasons.[1]

This article uses material from the article Vienna Art Orchestra from the free encyclopedia Wikipedia and it is licensed under the GNU Free Documentation License.

Charlie Brown Theme David Benoit Trio
Update Required To play the media you will need to either update your browser to a recent version or update your Flash plugin.