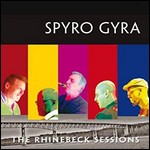 Spyro Gyra /ˌspaɪroʊˈdʒaɪrə/ is an American jazz fusion band that was formed in Buffalo, New York in 1974. The band's music combines jazz, R&B, funk, and pop music. The band's name comes from Spirogyra, a genus of green algae which founder Jay Beckenstein had learned about in college. The band has released over 30 albums and sold over 10 million copies.

Saxophonist Jay Beckenstein and keyboardist Jeremy Wall formed a band with jazz and rock musicians who were playing in the Buffalo bar and club circuit. In 1974, when a bar owner asked for the band's name, Beckenstein said, "spirogyra", a type of algae he had learned about in school. The bar owner wrote the name incorrectly, "Spyro Gyra", but it stuck. The founding members of the band were Beckenstein, Wall, bassist Jim Kurzdorfer, drummer Tom Walsh, and keyboardist Tom Schuman.[1] In 1977, they released Spyro Gyra independently before making a deal with Amherst Records,[2] which re-released the album with a different cover. It included "Shaker Song," which reached No. 90 on Billboard's Hot 100.[3]

When Infinity Records folded, Catching the Sun was released on MCA in February 1980, becoming the No. 4 jazz album of 1980 and peaking at No. 31 in the UK.[4] Bassist Jim Kurzdorfer left the group in 1980, replaced by David Wofford. The group released their next album, Carnaval, in late 1980. Like Catching the Sun before it, Carnaval was a gold selling album. Carnaval became Billboard 's No. 7 jazz album of 1981.

It was this core unit that recorded 1985's Alternating Currents, which featured the hit "Shakedown." After percussionist Manolo Badrena, a veteran of Weather Report and a previous guest musician on Spyro Gyra's albums, joined the band as a full-time member, replacing Gerardo Velez, the group released the 1986 follow-up Breakout. Alternating Currents (1985) and Breakout (1986) would be among the top 15 Jazz Albums in Billboard in 1986. Longtime co-producer Richard Calandra died in October 1986 of pancreatic cancer.

In 1987 Roberto Vally replaced Kim Stone on bass for the Stories Without Words album, which would also be Manolo Badrena's final album with the band. Rites of Summer (1988) introduced bassist Oscar Cartaya. Both Stories Without Words and Rites of Summer were among Billboard's top 15 Contemporary Jazz Albums of 1988. In 1989, Point of View provided another turning point for the band, as Julio Fernández was replaced by guitarist Jay Azzolina. Spyro Gyra ended the decade as Billboard's most successful jazz artist of the 1980s.

Percussionist Marc Quiñones joined the group for Fast Forward (1990), though it would be his only album, and the last album for Richie Morales and Jay Azzolina. Guitarist Julio Fernandez rejoined the band for two new tracks included on the "best of" album, Collection, which also marked the debut of drummer Joel Rosenblatt.

Three Wishes (1992) introduced bassist Scott Ambush. The following year's Dreams Beyond Control included guest appearances by former Santana vocalist Alex Ligertwood, marking the first appearance of lyrics on a Spyro Gyra album. After this album, Dave Samuels left the band to pursue solo projects, although he would appear with the band on later albums.

In 1995, the band released Love and Other Obsessions with guests Deniece Williams, Barrington Henderson, Billy Cliff, and a host of other backing vocalists and musicians, including Dave Samuels. This album marked the group's last flirtation with traditional R&B vocals. It was the first of a series of albums with the quintet lineup of Beckenstein, Schuman, Fernandez, Ambush and Rosenblatt, which lasted until 2004.

Drummer Joel Rosenblatt left the band during the making of The Deep End, leaving room for two other drummers, guest Billy Kilson and drummer Ludwig Afonso, who became Rosenblatt's replacement. The band's next album, 2006's Wrapped in a Dream, was the first Spyro Gyra album in twenty years to be nominated for a Grammy Award. Trinidadian Bonny Bonaparte (Bonny B) joined as drummer for Good to Go-Go (2007), which areceived a Grammy nomination, as did A Night Before Christmas and Down the Wire (2009).

A Foreign Affair was released in 2011 and included Beckenstein, Schuman, Fernandez, Ambush, and Bonny B, as well as guest vocalists Arijit Singh and Keb' Mo'. The album debuted at No. 2 on the Billboard jazz album chart. Bonaparte left the group due to health issues in November 2011 and was replaced by Lee Pearson.

The Rhinebeck Sessions (2013) included Beckenstein, Schuman, Fernandez, Ambush, and Pearson. According to the group, it was written and recorded over three days in a recording studio in Rhinebeck, New York. In 2015, there was yet another change of drummers with Lionel Cordew replacing Pearson.

This article uses material from the article Spyro Gyra from the free encyclopedia Wikipedia and it is licensed under the GNU Free Documentation License.