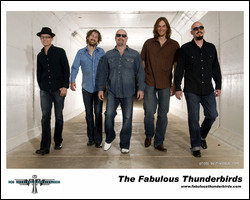 The Fabulous Thunderbirds is an American, Grammy-nominated blues rock band, formed in 1974.

After performing for several years in the Austin, Texas blues scene, the band won a recording contract with Takoma/Chrysalis Records, and later on signed with Epic Records. In 2011, they signed with Severn Records.[1]

Their first two albums were released in 1979 and 1980 with Kim Wilson's lead vocals and harp, Jimmie Vaughan as lead guitarist, Keith Ferguson on bass guitar. Mike Buck was on drums for the first album, but left the band, and was replaced by Fran Christina on the second. Both albums initially sold through the small number printed,(about 3 thousand units) and are now regarded as significant blues recordings.[2] The Thunderbirds' blues style mixed Texas blues with the harmonica laced swamp blues sounds of Slim Harpo and Lazy Lester — both of whom the Thunderbirds covered.[3][4] The band's third album, Butt-Rockin', released in 1981, took the band closer to old rhythm and blues and added additional musicians playing piano and brass.

Although the Fabulous Thunderbirds had become favorites of fellow musicians — opening shows for the likes of The Rolling Stones and Eric Clapton — and had been critically well-received, the band's records did not sell particularly well.[5] Chrysalis dropped the band following the release of T-Bird Rhythm, leaving the band without a contract for four years. While still in limbo, the Fabulous Thunderbirds continued to play concerts across the U.S. During this time, bassist Keith Ferguson left the band and was replaced by Preston Hubbard, a former member of Roomful of Blues. In 1985, the band finally landed another recording contract with Epic/Associated.

The single, "Tuff Enuff" was featured in the 1986 film Gung Ho. It was also featured in the film Tough Guys, as was the follow-up single "Wrap It Up", which went to number 50 in the Billboard Hot 100. "Tuff Enuff" remains the band's only Top 40 hit, peaking at #10 on the Billboard Hot 100. The album "Tuff Enuff" went gold in several countries and subsequently platinum in the United States with sales of 1 million plus. The band's music was also used in the 1987 movie Hot Pursuit. The Fabulous Thunderbirds' next album, Hot Number, fell off the charts quickly. But following that, their recording of Powerful Stuff was a success, based in part upon its inclusion in the 1988 film Cocktail. The band then embarked on a long series of line-up changes and albums throughout the 1990s. Long time drummer Fran Christina left in 1996 and went on to join with Marsha Ball and later Doug Sahm's "Last Real Texas Blues Band".

Doug "Kid" Bangham left the band after three years to pursue a solo career and open the Carver School of Music and the Carver Institute of Rock in Carver, Ma.

In the early 1990s, Kim Wilson recorded a pair of solo albums while continuing to tour with The Fabulous Thunderbirds.[6] In 1994, the band recorded a ninth album, Roll of the Dice, which was released on Private Music in 1995. High Water followed in 1997, although this was actually a collaboration between Wilson and studio musicians Steve Jordan and Danny Kortchmar issued under the Fabulous Thunderbirds name.

On the evening of February 16, 2000, The Fabulous Thunderbirds made history, becoming the first band ever to be broadcast on the Internet using high-definition cameras. The companion DVD, Invitation Only, is one of the first high-resolution multi-track recordings of a live concert event. The companion CD Live! was released in 2001.[7]

The band recorded Painted On in 2005, produced by Steve Berlin (of Los Lobos) and featuring Rachel Nagy of The Detroit Cobras on the track Love Speaks Louder Than Words. Guitarist Nick Curran joined Wilson on vocals for Two Time Fool.

The Fabulous Thunderbirds have maintained an intense touring schedule throughout the United States and Europe since the early 1990s.

Bassist Ronnie James and guitarist Troy Gonyea toured, to considerable acclaim, with Booker T. Jones in England in 2009, with the addition of guitar player Marc Ford from The Black Crowes and Darian Gray on drums.

This article uses material from the article The Fabulous Thunderbirds from the free encyclopedia Wikipedia and it is licensed under the GNU Free Documentation License.

Dalmatia Philipp Rellstab
Update Required To play the media you will need to either update your browser to a recent version or update your Flash plugin.