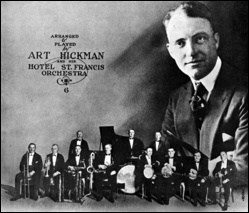 In 1915, they performed at the world's fair in San Francisco. Four years later they were hired by Florenz Ziegfeld Jr. to play at his nightclub on the roof of the New Amsterdam Theatre in New York City. During the next year, they accompanied the Ziegfeld Follies. Hickman's orchestra went back to California and played again at the St. Francis Hotel and the Ambassador Hotel in Los Angeles. After Hickman retired, the band was led by Frank Ellis. Hickman's "Rose Room" became a big band standard.[1]

Jelly Roll Morton disputed the notion that Hickman's orchestra was one of the first big bands.[3]

He's My Guy Clifford Brown & Sarah Vaughan
Update Required To play the media you will need to either update your browser to a recent version or update your Flash plugin.