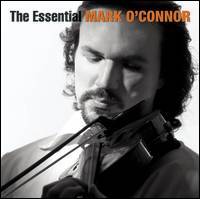 Mark O'Connor (born August 5, 1961 in Seattle, Washington) [1] is an American bluegrass, jazz, country and classical violinist fiddler, composer and music teacher. O'Connor's music is wide-ranging, critically acclaimed, and he has received numerous awards for both his playing and his composition. As a teenager he won national string instrument championships for his virtuoso playing of the guitar and mandolin as well as on the fiddle. His mentors include Texas old-time fiddler Benny Thomasson[2] who taught O'Connor to fiddle as a teenager, French jazz violinist Stéphane Grappelli[3] whom O'Connor toured as a teenager and guitarist Chet Atkins.[4]

At an early age Mark O'Connor was considered a child prodigy winning national titles on the fiddle, guitar and mandolin as a teenager. In 1975 at age thirteen, O'Connor won the prestigious Grand Masters Fiddle Championships[5] in Nashville against amateur and professional competitors of all ages. Later that year in 1975, after turning to age 14, he accomplished the same feat on acoustic guitar at the National Flatpick Guitar Championships in Winfield, KS.[6] At age 19, he won the Buck White International Mandolin Championship in Kerrville, TX.[7] He is a four-time grand champion at the National Oldtime Fiddlers Contest in Weiser, Idaho[8] 1979, 1980, 1981 and 1984.[9]

He has recorded solo albums for Rounder, Warner Bros. Records, Sony, and his own CD line OMAC Records.

O'Connor has won two Grammy awards; one for his New Nashville Cats album and another for his Appalachian Journey album he did with Yo-Yo Ma and Edgar Meyer.[10] He was named Musician of the Year by the Country Music Association six years in a row (from 1991-1996).[11] His collaborative single Restless (with Vince Gill, Ricky Skaggs and Steve Wariner) won the 1991 CMA Vocal Event of the Year award.[12]

O'Connor has crossed musical genres, composing, arranging, and recording folk, classical and jazz music. His Fiddle Concerto has received over 200 performances making it one of the most performed concertos written in the last 40 years.[13] He has composed eight concertos, string quartets, string trios, choral works, solo unaccompanied works and a new Symphony (See Compositions) . He has worked and recorded with a wide variety of artists, such as Chet Atkins, James Taylor, Michelle Shocked, Alison Krauss, David Grisman, Tony Rice, Bela Fleck, Renée Fleming, Pinchas Zukerman, Stéphane Grappelli, Patty Loveless, The Dixie Dregs, John Hartford and Wynton Marsalis. Some of his more recent albums are or contain tributes to his musical mentors and inspirations, including Niccolò Paganini, Benny Thomasson, and Grappelli.

He has contributed music to the PBS Series Liberty! The American Revolution (the companion album is Liberty!).[14] He recorded his "Fanfare For The Volunteer" with the London Philharmonic in 1999 for Sony Classical,[15] and one of his most critically acclaimed orchestral pieces Americans Seasons for Sony Classical[16] 2 as well. O'Connor recorded a 2 1/2 hour double CD of his music with the mandolinist Chris Thile entitled Thirty-Year Retrospective. It celebrates his thirty years as a recording artist on his own OMAC label. He also provided the soundtrack to a 30-minute animated film on the story of Johnny Appleseed (and released the music on his 1992 album Johnny Appleseed), narrated by Garrison Keillor, He contributed four tracks to a 1993 album on the theme of The Night Before Christmas narrated by Meryl Streep that was recently reissued for Starbucks. One of his most popular compositions, Appalachia Waltz (appearing on the album of the same title), has been adopted by Yo-Yo Ma as part of his live performance repertoire, and used frequently as music for weddings including two of Vice President Al Gore's daughters. O'Connor hosts an annual fiddle camp (the Mark O'Connor Fiddle Camp) in Tennessee and an annual Strings Conference in San Diego, California. O'Connor is currently living in New York City working on new music. One of his recent efforts is his piano trio entitled Poets and Prophets which is inspired by his boyhood hero Johnny Cash. Currently O'Connor and Rosanne Cash have teamed up for concert dates premiering their collaboration in New York at Merkin Hall, January 2007. He plays on Ken Burns' The War.

On April 28, 2009, O'Connor teamed with prominent chamber musicians Kavafian, Neubauer and Haimovitz to present his second and third string quartets, amalgamating bluegrass with classical styles, at Merkin Concert Hall in New York. A recording by the same artists is to be released on O'Connor's OMAC label during May.

Official Wikipedia Page On November 16, 2009, Mark O'Connor released books 1 and 2 of his 10-book O'Connor Method - A New American School of String Playing[17] for string teachers and students of the violin designed to "guide students gradually through the development of pedagogical and musical techniques necessary to become a proficient, well-rounded musician through a carefully planned succession of pieces." Pieces cover a wide range of genres, and include: folk melodies such as "Amazing Grace," "Cielito Lindo" and "Buffalo Gals," American Classical tunes such as Copland's "Hoedown," two themes from Dvorak's New World Symphony, and O'Connor's "Appalachia Waltz."[18] The series also contains short essays about topics including famous American fiddlers such as Thomas Jefferson and Davy Crockett, the history of Gypsies and Mariachi, and various dances. Teacher training sessions based on the method take place around the country.

Double Concerto "For the Heroes" for violin, cello and symphony orchestra - 35 min

Concerto No. 6 "Old Brass" for violin and orchestra - 35 min

III. Fanfare for the Volunteer - 20 min

The Fiddle Concerto for violin and orchestra - 40 min

The Fallen for flute and string orchestra - 20 min

Surrender The Sword for violin and string orchestra - 10 min