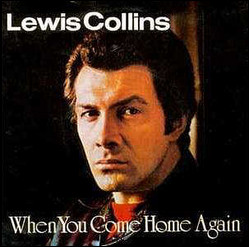 The son of Bill Collins, a shipwright and amateur musician who played the piano in local clubs with the Savoy Swingers band,[4] Lewis was born in Bidston, Birkenhead on the Wirral (then part of Cheshire).[1][4] Aged two, he won the Most Beautiful Baby in Liverpool contest.[4] He was educated at Bidston Primary and Grange School in Birkenhead.[1]

Aged 13, his father bought him a drum kit for £25.[4] His first gig was playing with his father's band, and he also joined a group of older school pupils to form The Renegades, at the start of the Merseybeat music scene in Liverpool.[4]

On leaving school, he took an apprentice hairdressers position at the Andre Bernard salon, alongside fellow apprentice Mike McCartney.[4] He soon gained a reputation for his skills, and became the local hairdresser for singer Helen Shapiro.[4] He also wrote songs with Mike at the McCartney home, and when drummer Pete Best left The Beatles Mike suggested Lewis as a possible replacement, to band member and his elder brother Paul.[4]

Turning down the option of an audition with The Beatles, he continued playing music on an amateur basis for bands including The Eyes and The Georgians.[1] Later that year he left hairdressing to become the bass player in The Mojos,[1] featuring on the singles "Goodbye Dolly Gray" and "Until My Baby Comes Home".[5]

He worked as a lorry driver before deciding that he wanted to become an actor.[4]

Collins moved to London and successfully applied to train at London Academy of Music and Dramatic Art in Hammersmith.[1] He played Romeo in a college production, alongside Juliet played by fellow student Patricia Hodge.[4]

On graduation he joined the repertory theatre circuit, initially in Chesterfield before joining the company of Citizens Theatre, Glasgow,[1] where his duties included teaching deaf and dumb children mobility skills, learning British sign language so he could communicate with them.[4] He then toured with Prospect Theatre Company, and did tours in the United States and Canada, before moving to London's West End and starring in City Sugar and The Threepenny Opera.[1]

Collins was noticed by television producers whilst appearing in The Farm directed by Lindsay Anderson at the Royal Court Theatre,[1] and his first television role came in 1974 in the BBC's police drama Z Cars. His first major television role was in Granada Television's comedy The Cuckoo Waltz in 1975 as the lodger, alongside his landlord played by David Roper, and landlady Diane Keen who he constantly tried to seduce.[4]

In 1976, Brian Clemens was writing a tougher follow-up to The Avengers. Having cast Martin Shaw, Clemens found that the partnership in filming the pilot with Anthony Andrews lacked chemistry, and remembered Collins from an episode of The New Avengers where he agitated Shaw. Collins played the role of William Bodie, a former mercenary-turned-SAS trooper, until the series ended its run in 1983, with one episode (Klansmen from Series One in 1978) remaining unbroadcast by UK terrestrial television due to its alleged violence and racist content.[4]

In 1982 he auditioned for the role of James Bond, but his audition with the producer Cubby Broccoli did not go well and he was rejected as being "too aggressive". Collins regarded this in hindsight as a key missed opportunity in his career.[1][6] His best known role outside The Professionals was that of SAS officer Captain Peter Skellen in the film Who Dares Wins (1982). He subsequently applied to join the Territorial SAS, a unit open to part-time reservists but was rejected because of his fame, despite passing the entrance tests.[1][4][5] In the early 1980s, Collins trained with 3 Company of the 10th (V) Battalion Parachute Regiment, and took part in a long distance charity run.[4]

During the 1980s Collins found himself typecast by the success of his role as Bodie, and appeared in low-budget and commercially unsuccessful war films including Code Name: Wild Geese (1984) and Kommando Leopard (1985). He played second lead to Michael Caine in the British television movie Jack the Ripper in 1988. He took the role of Colonel Mustard in the ITV game show Cluedo at the start of the 1990s. His final acting performance was in an episode of The Bill in 2002.

Collins relocated with his family to Los Angeles, USA, to seek work in film production, enrolling for courses in screen-writing and direction at the UCLA School of Theater, Film and Television.[1][4] This led to no further professional work, and he abandoned acting and drama and saw out his last decade in private business selling computer equipment. In early 2012, he was cast to play the role of the Earl Godwin in the historically based feature film production of 1066. In June 2013, it was reported that he had withdrawn from the production due to ill health, and split with his agent, Susan James.[1][4]

Collins held a private pilot's licence,[1] a black belt in Ju-Jitsu and was trained in karate.[1][5] His hobbies included parachuting, sports shooting,[1] and he continued to play musical instruments throughout his life.[4][5]

Almost Like Being In Love Philipp Rellstab / Uros Perich
Update Required To play the media you will need to either update your browser to a recent version or update your Flash plugin.