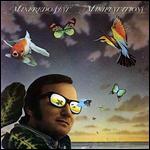 Manfredo Irmin Fest (May 13, 1936 - October 8, 1999) was a legally blind bossa nova and jazz pianist and keyboardist from Brazil. He was also a famous bandleader. He was born in Porto Alegre, Rio Grande do Sul, Brazil, and he died at 63 years old in Tampa Bay, Florida, USA. He was husband of the composer Lili Fest and father of the guitarist Phil Fest.

Manfredo Fest was of German descent: his father was a concert pianist from Germany who taught at University in Porto Alegre. Although he was blind, Fest learned to read music in Braille. His initial musical training had been classical, but at 17 years old, he became interested in the jazz works of George Shearing and Bill Evans. At college he gained steady work playing bossa nova in São Paulo.

In 1961, Fest graduated in piano from the University of Rio Grande do Sul. He also learned to play keyboards and saxophone. One year later, he started his musical career playing in bars, clubs and pubs. In 1963, he recorded his first LP, called Bossa nova, nova bossa. In this album, he counted with Humberto Clayber (bass), Antonio Pinheiro (drums) and Hector Costita (saxophone and flute).

In the 1970s he traveled to the United States where he worked with Sérgio Mendes. His American debut album Jungle Cat was released in 1978. He was relatively obscure, but worked with noteworthy groups including Béla Fleck and the Flecktones. Fest was a semi-regular at Fandango's on Siesta Key, near Sarasota, Florida.

Fest died of liver failure at the age of 63 in Tampa, Florida, not far from his home in Palm Harbor, where he had lived for 12 years.

Sweep Stakes Stuff Combe & Edelhagen Allstars
Update Required To play the media you will need to either update your browser to a recent version or update your Flash plugin.