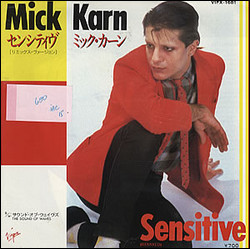 Karn was born into a Greek Cypriot family, in Nicosia, Cyprus, as Andonis Michaelides, which was later modified to Antony Michaelides. He had an older brother and sister. In late October 1961, the family emigrated to London, England, when Andonis was three years old.[3] He was educated at Catford Boys' School, Catford, South East London where he was taught by William Newman-Norton, now the Metropolitan Seraphim of Glastonbury and Head of the Orthodox Church in the UK. Karn truanted from school occasionally with Jack Stafford (aka Jak Airport) of X-Ray Spex and Classix Nouveaux. Karn remained based in London until 24 May 2004, when he moved back to Cyprus with his wife and son, remaining there for six years before moving back to London in late 2010.

The band Japan, whose other members included David Sylvian, keyboardist Richard Barbieri and Sylvian's brother Steve Jansen as drummer, began as a group of friends, who all studied at Catford Boys' School. As youngsters they played music as a means of escape, playing Sylvian's two-chord numbers sometimes with Karn as the front man, sometimes with Sylvian at the fore. Guitarist Rob Dean joined the band later.

They christened themselves Japan in 1974, signed a recording contract with German disco label Hansa, with whom they recorded three studio albums and became an alternative glam rock outfit in the mould of David Bowie, T.Rex, and The New York Dolls. They switched to Virgin Records to record their subsequent albums Gentlemen Take Polaroids and Tin Drum.

As the band started to achieve commercial success with the release of Tin Drum, and "Ghosts", which reached the top five in 1982, tensions and personality conflicts between band members rose; Tin Drum was to be the band's final studio album. Long-simmering differences among the bandmembers came to a head when Karn's girlfriend, photographer Yuka Fujii, moved in with Sylvian and the individual members forged ahead with their own projects; Karn cited in an interview that as tensions with their record company had abated following Japan's commercial success, band members began focusing on personal differences rather than on the common enemy.[4]

Karn released his first solo album, Titles, in November 1982, just as Japan had announced their split. In 1983, he collaborated with Midge Ure on the UK top 40 single "After a Fashion", and in 1984, he formed Dalis Car with Peter Murphy of the post-punk group Bauhaus. The duo released one album, The Waking Hour, in late 1984.[1] In the 1990s he worked with artist David Torn and a number of Japanese musicians, and formed the multinational new wave band, NiNa. Latterly, he worked as a solo artist and as a sculptor and photographer.

Karn contributed to recordings by other artists, playing bass guitar on Bill Nelson's Chimera, bass guitar and saxophone on Gary Numan's 1981 album Dance, and also played with Kate Bush and Joan Armatrading.[5] In the 1990s he started the Medium Productions label along with Steve Jansen and Richard Barbieri, two of his fellow former Japan-members.[5] and Debi Zornes (label management and artist co-ordination). In 2006, the MK Music imprint was established, by Mick Karn and Debi Zornes and beginning with 2006's Three Part Species, all releases, including the autobiography, have the MK Music logo on them.

At around the turn of the century, Karn worked with Gota Yashiki, Vivian Hsu, Masahide Sakuma and Masami Tsuchiya in the band The d.e.p., or doggy eels project.[6] In 2001, he worked with Paul Wong on his "Yellow Paul Wong" release. Karn left London in 2004 to live in Cyprus with his wife and son, financially enabling himself to keep working as a musician/artist. In 2009, Karn also released his autobiography, titled Japan & Self Existence, available through his website and Lulu, which details his music career, his interests in sculpture and painting, his childhood, relationships, and family.

On 30 August 2010, Peter Murphy disclosed via video message (subsequently removed/hidden) on his personal Facebook profile that he would be reuniting with Mick Karn for a week in London, perhaps in November, to begin writing and recording for a second Dalis Car album. Murphy also added that this would be the first time the two had seen each other since 1983.[7][8] The project was cut short, however, as Karn had recently been diagnosed with cancer. He died on 4 January 2011.[9] Five of the tracks they did record were released on 5 April 2012 as an EP entitled InGladAloneness.[10] The tracks were mixed by Steve Jansen, mastered by Pieter Snaper in Istanbul and the artwork for the EP was created by Thomas Bak with a painting by Jaroslaw Kukowski.

Karn was essentially a self-taught musician. His first musical instrument was bassoon, with which he attended and passed an LSSO audition. After his bassoon was stolen from him, he purchased a bass guitar for 5. It was then he joined up with David Batt (Sylvian), who played acoustic guitar.[12]

Karn was principally the bassist within Japan, but also played all the wind instruments, including the saxophone; on Tin Drum, he played the Chinese suona (credited as 'dida') for the authentic oriental sound. Karn's use of the fretless bass guitar, an unusual instrument in modern popular music, produces a distinctive sound and playing style, which makes his playing immediately recognisable.[5]

Karn played an aluminium-neck Travis Bean bass on all Japan albums up to Gentlemen Take Polaroids. In 1981 he moved to Wal basses, purchasing two Mark I instruments, one with rare African tulipwood facings, the other a cherry solidbody. Karn recorded Japan's last studio album Tin Drum with the Wal and had continued to use these, along with a headless Klein 'K Bass'.

Mick Karn revealed that he earned two diplomas in psychotherapy from a West London college, entitling him to call himself 'Member of the Associated Stress Consultants, Psychotherapy, and Regression & Hypno-analysis'.[13]

In June 2010, Karn announced on his website that he had been diagnosed with advanced-stage cancer, though the specific type of cancer was not mentioned.[14] According to David Torn, Karn's cancer had apparently already spread and he was undergoing chemotherapy.[15] The website announcement stated that Karn had been struggling financially for some time, and appealed for donations to help pay for his medical care and provide financial assistance for his family. In addition, several people Karn has worked with, in particular Midge Ure,[15] Porcupine Tree,[14] and Masami Tsuchiya,[6] announced concerts in support of the appeal. According to a website update dated 3 September 2010, the funds raised by the appeal enabled Karn and family to move back to London where Karn received treatment.[14] However, the cancer had spread beyond the possibility of treatment, and Karn died at home in London on 4 January 2011.[14][9]

Le temps d'un jazz Daniel Roure
Update Required To play the media you will need to either update your browser to a recent version or update your Flash plugin.