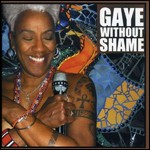 Gaye's father, Clarence R. Todd, was the first Black school board member in Fredericksburg and was also a jazz musician.[1] He later founded a performing arts group for black youth called "Souls of Shade", today known as Harambee 360.[2] Her mother, Gladys P. Todd, was one of the first organizers of the local civil rights movement in Fredericksburg, and also brought old jazz records home from her job at the Youth Canteen to give to the young Gaye.[2] Both parents were major influences on her music and social identity.

Gaye's surname, Adegbalola, was given to her by a Yoruba priest she met in 1968.[3] Meaning "I am reclaiming my royalty," Adegbalola uses the name to signify her pride in her black heritage.[3][4]

Gaye Todd graduated from high school as valedictorian in 1961, having already participated in numerous sit-in protests and picket lines as a member of the civil rights movement.[5] She later attended Boston University, graduating with a B.A. in Biology.[5] Gaye's occupations after college included those of a technical writer for TRW Systems, a biochemical researcher at Rockefeller University, and a bacteriologist at Harlem Hospital, where she was also the local union representative.[6] These were all in sharp contrast to her first job as a teenager, working in a laundry for forty-five cents an hour.[6]

From the years 1966 to 1970 she was involved in the Black Power Movement in New York and organized the Harlem Committee on Self-Defense.[6] During this same period she met and married her husband. Her son, Juno Lumumba Kahlil was born in 1969, and would later make his own mark in the goth/industrial music world.[6]

In 1970, after divorcing her husband, Gaye Adegbalola returned to Fredericksburg, where she taught science, gifted and talented, and creative thinking courses in the local schools.[6] She helped her father direct the Harambee Theatre, sometimes acting in performances herself, until her father's death in 1977.[2] Having played the flute in her high school band, she began studying guitar in 1977.[7] In 1978 she received her Master of Education in Educational Media from Virginia State University,[6] and in 1982 was honored as Virginia's Teacher of the Year.[8] She spent much of the rest of the eighties conducting teachers' workshops on motivational and teaching techniques.

Saffire - The Uppity Blues Women was first formed as a duo in 1984 by Ms. Adegbalola and her guitar teacher, Ann Rabson, with third member Earlene Lewis joining later to form a trio.[7] Lewis was replaced by Andra Faye in 1992. Saffire recorded their first album on their own label in 1987, Middle Age Blues, with songs including "They Call Me Miss Thang," and "Middle Age Blues Boogie." The following year Gaye Adegbalola became a full-time blues performer and in 1990 the band recorded its first album for Alligator Records, with Gaye winning the "Song of the Year" W.C. Handy Award for "Middle Age Blues Boogie."[7] In 1991, she met her life partner, Suzanne Moe.[5]

During the 1990s Gaye Adegbalola held workshops on various aspects of blues music and worked as a blues music reporter for the World Cafe program on National Public Radio. She also won a battle against cancer. In 1998 she co-founded the Steering Committee of the Blues Music Association. Her first solo album, Bitter Sweet Blues, was recorded in 1999. In addition to her own original compositions ("You Don't Have to Take It (Like I Did)"; "Big Ovaries, Baby"; and "Nothing's Changed") the album featured covers of songs by Bessie Smith, Smokey Robinson, Ma Rainey, and Nina Simone. In 2000, in a short piece on her work and career in The Advocate, Adegbalola came out as a lesbian.[4]