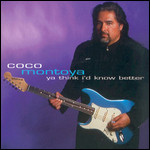 Montoya's career began in the mid 1970s when Albert Collins asked him to join his band as drummer. Collins took Montoya under his wing and taught him his "icy hot" guitar style. The two remained friends even after Montoya left Collins' band.

In the early 1980s John Mayall heard Montoya playing guitar in a Los Angeles bar. Soon after Mayall asked Montoya to join the newly reformed Bluesbreakers. He remained a member of the band for 10 years.

In 1995 he appeared with the Cate Brothers for the resumption of their recording career on their release, Radioland.[1] Since that same year, Montoya has recorded several solo albums.

In 2002, he featured on the Bo Diddley tribute album Hey Bo Diddley A Tribute!, performing the song "Pills."

Montoya is left-handed but plays a left handed guitar with a right handed neck. (Strings upside down). [2]

My One And Only Love Jimmy Ponder
Update Required To play the media you will need to either update your browser to a recent version or update your Flash plugin.