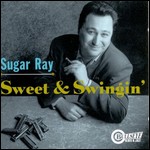 Sugar Ray Norcia (born Stonington, Connecticut, United States)[1] is an American electric and soul blues singer and harmonica player. He is best known for his work with his backing band, The Bluetones, with whom he has released seven albums since 1980.

Norcia started to play his harmonica based blues at high school. Once Norcia had relocated to Providence, Rhode Island, he formed the Bluetones which secured a residence as the house band at a local nightclub. They backed touring acts, such as Big Walter Horton, Big Mama Thornton, Big Joe Turner and Roosevelt Sykes in nearby clubs. During the latter part of the 1970s, the band backed Ronnie Earl before he departed to join Roomful of Blues.[2]

Norcia's solo recordings included the EPs Sugar Ray and the Bluetones (1979); Ronnie Earl and the Broadcasters featuring the Sensational Sugar Ray (1982), plus a couple of releases on Rounder Records, Knockout (1989) and Don't Stand In My Way (1991). Don't Stand In My Way was the first release by the Bullseye Blues label. The Bluetones also backed Miki Honeycutt on her initial album, Soul Deep.[2]

In 1991 Norcia himself joined Roomful of Blues as their lead vocalist.[3] They issued three albums with Norcia and undertook extensive touring duties. Norcia also undertook work away from the group. He appeared on a Bullseye Blues album from trombonist Porky Cohen, Rhythm and Bones, (1996) and on the LP Little Anthony and Sugar Ray: Take It From Me, (1994).[2] Also in 1994 Norcia appeared on Otis Grand's Nothing Else Matters album.[4]

In 1998 Norcia exited from Roomful of Blues, and issued Sweet & Swingin', which featured songs written by Hank Williams, Arthur Alexander and Big Walter Horton; plus a guest appearance from The Jordanaires. In 1999 Norcia participated with James Cotton, Billy Branch and Charlie Musselwhite, on the Grammy Award nominated album, Superharps.[2]

More recently, Norcia contributed his harmonica playing on records by Pinetop Perkins and Doug James, in addition to touring along with the 'Sugar Ray Norcia Big Band'.[2]

In June 2007, Sugar Ray and the Bluetones released their seventh studio album, My Life, My Friends, My Music on Severn Records.[5]

Gee Baby, Ain't I Good To You George Shearing
Update Required To play the media you will need to either update your browser to a recent version or update your Flash plugin.