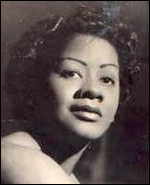 At the age of eleven she made her musical debut replacing a pianist that called in sick in her fathers orchestra. She came from a family very musical family related to music her brothers and father were musicians. She studied in the Municipal Conservatory of Havana.

In the 1940s is where she reached her greatest recognition as composer of boleros, guarachas and sons. Her songs included Fiesta de Besos, Canción sin Amor, Increíble and possibly the most famous of all her works, Dos Gardenias composed in 1947 . This last composition has been interpreted by many singers such as Daniel Santos, Antonio Machin, Pedro Vargas, Maria Rita, among others.

Le boléro des contrôlerus Martin Abbuehl's Swing Express
Update Required To play the media you will need to either update your browser to a recent version or update your Flash plugin.