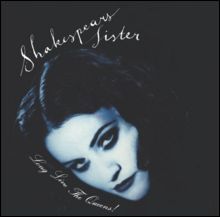 Siobhan Máire Deirdre Fahey (/ʃəˈvɔːn ˈfɑːhi/ shə-VAWN FAH-hee; born 10 September 1958) is an Irish-born British[2] musician, whose vocal range is a light contralto.[3] She was a founding member of the 1980s British girl group Bananarama, who had a US number one hit with the 1986 single "Venus". She later formed the Brit Award- and Ivor Novello Award-winning musical act Shakespears Sister, who had a UK number one hit with the 1992 single "Stay". It was announced in April 2017 that Fahey would join the other original members of Bananarama for an upcoming UK tour.

Fahey has two younger sisters, Máire (who played Eileen in the video of the 1982 song "Come On Eileen", a hit for Dexys Midnight Runners) and Niamh. Her parents, Helen and Joseph Fahey, both came from County Tipperary, Ireland. Fahey lived in Dublin for about two years, before her family migrated to Yorkshire, England, where her father Joseph was posted as a soldier in the British Army. Her family subsequently moved to Germany, then returned to the United Kingdom, where Fahey was sent to a convent school in Edinburgh, Scotland and attended schools in Stroud, Gloucester and Kent in southern England. When she was fourteen, she and her family moved to Harpenden, and two years later, she left home for London and became involved in the punk scene of the late 1970s.[4]

Fahey took a course in fashion journalism at the London College of Fashion, where she met Sara Dallin in 1980. The trio founded Bananarama, and recorded their first demo "Aie a Mwana" in 1981. Bananarama then worked with the male vocal trio Fun Boy Three, releasing two top five singles with them in early 1982,[5] before having their own top five hit with "Shy Boy" later that year. Fahey, along with Dallin and Woodward, co-wrote many of the group's hits, including "Cruel Summer", "Robert De Niro's Waiting...", "I Heard a Rumour", and "Love in the First Degree".

In 1988, frustrated with the direction she felt Bananarama was heading, Fahey left the group and formed Shakespears Sister.[6] Initially, Fahey effectively was Shakespears Sister, though American singer/songwriter Marcella Detroit later became an official member,[7] making the outfit a duo. Their 1992 single "Stay" spent eight weeks at number one on the UK Singles Chart and won the 1993 Brit Award for Best British Video.[8] At the 1993 Ivor Novello Awards, Fahey, Detroit and Dave Stewart received the award for Outstanding Contemporary Song Collection.[9] Fahey often appeared in the band's music videos and on-stage as a vampish glam figure. After two successful albums, tensions began to rise between Fahey and Detroit[10] and they split up in 1993. That year, Fahey admitted herself into a psychiatric unit with severe depression.[10]

In 1996, Fahey continued as Shakespears Sister by herself and released the single "I Can Drive". Intended as the first single from Shakespears Sister's third album, and her first record since her split with Marcella Detroit, the single performed disappointingly (UK number 30) which prompted London Records not to release the album.[11] Following this, Fahey left the label and after a lengthy battle, she finally obtained the rights to release the album (entitled #3) independently through her own website in 2004.[7]

In 1997, Fahey appeared opposite Martin Dunne in the Irish short film Pinned. She also briefly re-joined Bananarama in 1998 to record a cover version of ABBA's "Waterloo" for the Channel 4 Eurovision special A Song for Eurotrash. Fahey reteamed with Bananarama again in 2002 for a "last ever" reunion at the band's 20th anniversary concert at G-A-Y in London. The trio performed "Venus" and "Waterloo".

Fahey continued to make music into the new millennium. She had an active website from 2002 until July 2007. In 2005, Fahey independently released The MGA Sessions, an album recorded with frequent collaborator Sophie Muller in the mid-1990s. The music was recorded for a film which ultimately was never made. Only 1,000 copies of this release were pressed. Fahey's most recent single (under her own name), "Bad Blood", was released on 17 October 2005. In 2006, Fahey's website stated that she had been writing for other people; these include Kylie Minogue and (former Sugababe) Siobhan Donaghy, though neither of these endeavours made it to the final cut.

Fahey's track "Bitter Pill" was partially covered by pop band The Pussycat Dolls on their 2005 debut album PCD. The verses (which were slightly altered) and the overall sound of the song are from "Bitter Pill", but added in was the chorus of Donna Summer's "Hot Stuff". The song was renamed "Hot Stuff (I Want You Back)" and a remix was included as a B-side to their hit single "Beep".

On 13 November 2008, Fahey performed at the Pirate Provocateur Extravaganza launch party for the new Agent Provocateur winter collection, and for the release of Dirty Stop Out's new album Cuntro Classics at KOKO in London.

In 2008, Fahey appeared in the Chris Ward-written and directed short film What Shall We Do with the Drunken Sailor (based on the life of artist/model Nina Hamnett, self-styled "Queen of Bohemia"), with Fahey playing the role of Hamnett opposite actor Clive Arrindel, Donny Tourette (frontman with punk band Towers of London) and Honey Bane (former vocalist of the punk band Fatal Microbes).[12]

In 2009, Fahey decided to resurrect the Shakespears Sister name and released a new album. Entitled Songs from the Red Room, it was released on her own record label, SF Records[13] and included various singles she had released under her own name in recent years. Fahey performed her first live show in almost 15 years as Shakespears Sister in Hoxton, London on 20 November 2009.[14][15] In 2014, she joined the line-up of Dexys Midnight Runners for some shows, including at Glastonbury Festival.[16]

In 2017, it was announced that Fahey will join her former Bananarama bandmates for an upcoming UK tour. This will be the first live tour Fahey has done as a member of Bananarama.[17]

Fahey married Dave Stewart of Eurythmics in 1987; the couple divorced in 1996. They have two sons, Sam (born 1987) and Django James (born 1991).[18][10] The two brothers formed a musical band called Nightmare & The Cat.[19] As an infant, Sam Stewart appeared in early Shakespears Sister videos for "Heroine" and "You're History". Django Stewart is also an actor.

Prior to her marriage to Stewart, Fahey was romantically involved with Jim Reilly, the drummer for the Northern Irish punk rock band Stiff Little Fingers and Scottish singer Bobby Bluebell of The Bluebells, with whom she co-wrote the UK No. 1 "Young at Heart".[20]

^ a Since their inclusion on Songs from the Red Room, an album by Fahey's solo project Shakespears Sister, these songs are now usually credited as 'Shakespears Sister' rather than 'Siobhan Fahey'.

This article uses material from the article Siobhan Fahey from the free encyclopedia Wikipedia and it is licensed under the GNU Free Documentation License.