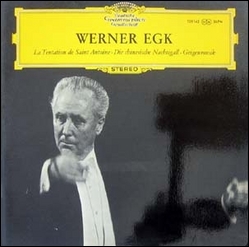 He was born in the Swabian town of Auchsesheim, today part of Donauwörth, Germany. His family, of Catholic peasant stock, moved to Augsburg when Egk was six. He studied at a Benedictine Gymnasium (academic high school) and entered the municipal conservatory. Egk demonstrated talents as a composer, graphic artist, and writer, and he moved first to Frankfurt to improve his piano talents and then, in 1921, to Munich. There, working as a theater composer and playing in the pit, he married Elizabeth Karl, a violinist. He derived his pen name "Egk" from his wife initials: Elisabeth, geborne Karl (Elisabeth, née Karl).[1] His only son, Titus, was born in 1924.[2]

Egk moved to Berlin in 1928, meeting composers Arnold Schoenberg and Hanns Eisler. He intended to become a cinema composer and accompanied silent films. When radio broadcasting became available to the public, Egk immediately realised its importance as a mass medium and developed operas and radio plays. He was introduced to Hans Fleisch, an important radio executive (also Paul Hindemith's brother-in-law and a Jew), by composer Kurt Weill. He received his first commission for broadcasting from Fleisch's company.

He returned to Munich in 1929 to work for the local radio station and settled in Lochham, a suburb. He became associated with musicians Fritz Büchtger, Karl Marx, and especially, Carl Orff, whom he had met in 1921. His music of the period shows a debt to the compositional style of Igor Stravinsky. He also became friends with new-music conductor Hermann Scherchen and the owners of the music publisher, Schott Music in Mainz. His career as a composer took off with the premiere of his radio opera, Columbus, in July 1933 (staged in April 1934).

Any composer working in Germany at the time had to deal with the Nazi regime coming to power in 1933. Michael H. Kater, Professor of German studies at York University labels Egk "The Enigmatic Opportunist" in his portrait of Eight German Composers of the Nazi Era, and by far the most extensive evaluation of the composer's wartime connections in English (Kater, 30). As a German of Catholic heritage, Egk was in no danger of falling in disfavor with the regime's racial policies; rather, the professional hardships for Jewish and others created opportunities. Egk's contact with Scherchen soon lapsed, and the composer developed a complicated relationship as well as a professional rivalry with Orff, whose works ultimately found more lasting success.

Initially, Munich cultural administrators had doubts about the compatibility of Egk's Stravinskian style with a Nazi audience, and he encountered difficulty with Munich's representative for Alfred Rosenberg's Kampfbund für deutsche Kultur (Militant League for German Culture), Paul Ehlers. He also faced criticism from Ludwig Schrott, another functionary of Rosenberg and a supporter of thoroughly Nazi composer Hans Pfitzner.

In 1935, he premiered his first opera Die Zaubergeige (The Magic Violin) in Frankfurt am Main. The work channeled Bavarian folksong and a diatonic idiom far less modernist than the more angular Columbus. This matched Nazi artistic guidelines prescribing folk elements as being close to the people. Swiss composer Heinrich Sutermeister saw the stylistic change as "opportunistic." The success of the work led to a commission for ballet music related to the 1936 Summer Olympics (for which he received a gold medal in the Art Competition)[3] and his appointment as conductor of the Berlin State Opera a position he held until 1941. Egk's protector in Berlin was Heinz Tietjen, director of the Prussian state theaters and artistic director of the Bayreuth Festival.

November 1938 saw the première of his opera Peer Gynt based on Henrik Ibsen's play. Propaganda minister Joseph Goebbels wrote in his diary on 1 February 1939: "I am very enthusiastic and so is the Führer. A new discovery for the both of us". Oddly enough, Egk had returned to his more Stravinskian style in the work. More conservative critics found elements in the plot threatening Nazi ideals of martial grandeur, and they found difficulties with reworking of the Nordic plot. One possible interpretation of the event was due to an argument Hitler was having with his lieutenant Göring, who had warned Hitler not to go to the opera, "because none of your favorite singers were in it." It has been credibly suggested Hitler and Goebbels decided to "like" the opera as a "taunt" to Göring for having the audacity to tell Hitler what he could and could not see (Kater 10 and accompanying footnotes, also an oral history from Viennese composer Gottfried von Einem, Vienna, Nov. 30, 1994).

As the thirties wore on, Egk was asked or perhaps commanded to make official pronouncements about German music, and he received a large commission (never fulfilled) for a large scale opera on Nazi themes. His next major work was the ballet Joan von Zarissa in 1940. In the following decade, it was common to pair the work with Orff's Carmina Burana. In general, Egk's music found much more success in Berlin, and Orff had lost to Egk in the prize surrounding the Olympic games composition. Unlike Egk, who enjoyed regular income from his artistic directorship, Orff was also self-employed and much impoverished. This exposed Egk to attack from Orff's partisans, though Egk and his wife continued to see Orff socially. These rivalries impinged on the credibility of witnesses in Egk's trial after the war.

Egk never joined the Nazi party and was exonerated in denazification tribunals held in 1947, but the trials were fraught with inaccuracies including accounts of involvement with the Austrian resistance movement that were highly dubious. Among Egk's defenders were Gottfried von Einem and composer Boris Blacher. Initially his Nazi affiliations were held against him, though only briefly. There are various interpretations regarding the extent of his collaboration:

The truth is probably somewhere in the middle (Kater, 22).

His major career began after the war. In Germany, Egk has been dubbed "Komponist des Wiederaufbaus" ("composer of the reconstruction", which followed World War II). Besides being a conductor and composer, he was head of the Berlin Musikhochschule (1950-1952) and important figure of the GEMA since 1950; he was also the first German president of the CISAC. In 1954 he became conductor of the Bavarian State Opera with a 20 year contract.

His later years saw a constant string of premieres at major European festivals, beginning with Irische Legende in 1955, conducted by George Szell and featuring Dietrich Fischer-Dieskau. His opera Die Verlobung in San Domingo opened the National Theatre Munich in 1963 and features a libretto by Heinrich von Kleist, pleading for racial tolerance. His late works, however, were almost exclusively instrumental. Exceptional among them are works for winds, including the Divertissement for Ten Wind Instruments (1974) and the Five Pieces for Wind Quintet (1975).

This article uses material from the article Werner Egk from the free encyclopedia Wikipedia and it is licensed under the GNU Free Documentation License.

Day By Day Pepe Lienhard Big Band & Swing4you!
Update Required To play the media you will need to either update your browser to a recent version or update your Flash plugin.