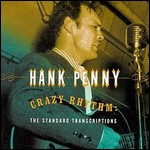 Herbert Clayton Penny (September 18, 1918 April 17, 1992) was an accomplished banjo player and practitioner of western swing.[1] He worked as a comedian best known for his backwoods character "That Plain Ol' Country Boy" on TV with Spade Cooley. He was married to country singer Sue Thompson from 1953-63.

Penny had three hits on the Billboard Country Singles chart, "Steel Guitar Stomp" (1946) an instrumental featuring both Noel Boggs on steel guitar and guitarist Merle Travis, "Get Yourself a Red Head" (1946), and his own composition "Bloodshot Eyes" (1950).

Penny's "Bloodshot Eyes" was also recorded in 1951 by rock and roll singer Wynonie Harris, who turned it into a major rock hit (King 4461). Harris was a big influence on Elvis Presley, who did go to see him play and met him in his formative years and recorded Roy Brown's Good Rocking Tonight after hearing Wynonie Harris' hit version. Appreciated by white country music fans and black rock and roll followers alike, "Bloodshot Eyes" became an early landmark in racial integration. It was much appreciated in the Caribbean, where Wynonie Harris had a large following. Along with other Wynonie Harris records, it was being played on Jamaican dancehalls as early as 1951. In 1958 Jamaican mento group Denzil Laing and the Wrigglers recorded a fine version of it for their Arawak Hotel album featuring jazz guitar great Ernest Ranglin. Bermuda Islands legend Sydney Bean also recorded it, releasing it circa 1955.

A lifelong fan of jazz, Penny recorded "Hillbilly Be-Bop" for King Records in 1949 and included jazz oriented sidemen in his band including guitarists Jimmy Wyble and Benny Garcia. For a time in 1950 singer Jaye P. Morgan was part of his larger band known as the Penny Serenaders.

Along with Amand Gautier, Penny co-founded the Palomino Club in Hollywood in 1949. The club was open seven days a week, and on Monday nights, after the closing time, it was "open stage" to some of the most famous jazz musicians in the country.

In 1952, Penny began hosting his own local Los Angeles series, The Hank Penny Show, which was canceled after only seven weeks.

By 1954, Penny moved to Las Vegas, where he began a seven-year run as a performer at the Golden Nugget casino, fronting a band that included steel guitar virtuoso Curly Chalker and at the same time, Roy Clark, whose own comedy delivery was influenced considerably by Penny's onstage comic timing. Penny's band backed Clark on his first album for Capitol Records.

Penny was born in Birmingham, Alabama. He died in 1992 of heart failure.[1] He was the father of actress Sydney Penny and producer Greg Penny. Country music historian Rich Kienzle began researching and writing about Penny's career in the late 1970s and devoted an entire chapter to him in his 2003 book "Southwest Shuffle."

This article uses material from the article Hank Penny from the free encyclopedia Wikipedia and it is licensed under the GNU Free Documentation License.