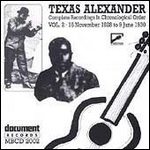 Alger "Texas" Alexander (September 12, 1900 April 18, 1954)[1] was an American blues singer from Jewett, Texas.[2] Some sources claim that he was the cousin of Lightnin' Hopkins, but no direct kinship has ever been established.[3] It was also claimed that he was the uncle of Texas country blues guitarist Frankie Lee Sims.[4]

A short man with a big, deep voice, Alexander started his career performing on the streets and at local parties and picnics in the Brazos River bottomlands, where he sometimes worked with Blind Lemon Jefferson.[5] In 1927 he began a recording career that continued into the 1930s, recording sides for the Okeh and Vocalion labels in New York, San Antonio, and Fort Worth.

In November 1928, Alexander recorded what has been believed by some to be the earliest version of "The House of the Rising Sun." Other songs he recorded include "Mama's Bad Luck Child," "Sittin' on a Log," "Texas Special," "Broken Yo Yo" and "Don't You Wish Your Baby was Built Up Like Mine?"[2]

His early records for Okeh are notable not only for the personal originality of his songs, but for the musical motifs against which they are set.[6] On April 9, 1934, Alexander recorded backed by the Mississippi Sheiks. Their line-up featured Bo Carter on violin, plus Sam Chatman and Walter Vinson on guitar. The eight tracks recorded included "Seen Better Days", and "Frost Texas Tornado Blues", the latter of which spoke of the tornado which destroyed Frost, Texas on May 6, 1930, leaving 41 dead.[7]

Alexander did not play an instrument himself, and over the years he worked with a number of other musicians, including King Oliver, Eddie Lang, Lonnie Johnson, Little Hat Jones, the Mississippi Sheiks, and Lightnin' Hopkins. He sang in the free rhythm of work songs, such as the migrant cotton pickers he performed for might have sung, which posed a challenge for those accompanying him. Indeed, his singing is difficult to follow, and on his gramophone records his accompanists can often be heard resetting their watches to 'Alexander Time'.[8] His finest collaborator was Lonnie Johnson, who devised free-form guitar melodies in counterpoint to the vocal lines.[8]

In 1939, Alexander murdered his wife, resulting in a stay in the state penitentiary in Paris, Texas from 1940 to 1945.[6] After that he returned to performing and recording, and Alexander made his last recording in 1950 with Benton's Busy Bees[2] (Leon Benton, guitar and Buster Pickens, piano), before dying at the age of 53 of syphilis in 1954.[9]

This article uses material from the article Alger "Texas" Alexander from the free encyclopedia Wikipedia and it is licensed under the GNU Free Documentation License.

Gospel-Otto Elmar Frey Sextett
Update Required To play the media you will need to either update your browser to a recent version or update your Flash plugin.