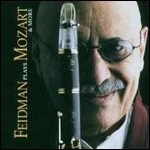 Giora Feidman was born in Buenos Aires, Argentina, where his Bessarabian Jewish parents immigrated to escape persecution. Feidman comes from a family of klezmer musicians. His father, grandfather and great-grandfather made music for weddings, bar mitzvahs, and holiday celebrations in the shtetls of Eastern Europe. Feidman married Ora Bat-Chaim, his personal manager, in 1975.[1]

Movie director Steven Spielberg invited him to play the clarinet solos for the soundtrack of Schindler's List, which won seven Academy Awards.

Feidman founded the "Clarinet and Klezmer in the Galilee" seminar and master class program, which takes place every year in Safed, Israel.[3]

This article uses material from the article Giora Feidman from the free encyclopedia Wikipedia and it is licensed under the GNU Free Documentation License.

El tejón de Kriens (The Badger Of Kriens) René Simon & Conexión Norte-Sur
Update Required To play the media you will need to either update your browser to a recent version or update your Flash plugin.