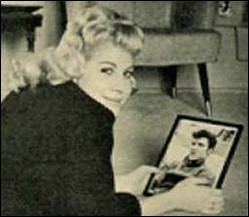 Sheeley attended Newport Harbor High School in Newport Beach, California, and briefly worked as a teen model. She went to Hollywood to meet the stars, and write songs. After a brief relationship with Don Everly, she wrote her first song, the autobiographical "Poor Little Fool". She reportedly told Ricky Nelson that her godfather had written the song for Elvis Presley. Nelson then recorded it, and in 1958 it became his first US Number 1[1] and the Hot 100's first #1. At age 18 she was the youngest woman to write an American number-one hit.

Jerry Capehart, the manager and songwriting partner of Eddie Cochran, then agreed to look after Sheeley's interests, and she and Cochran began a relationship. She wrote "Love Again" and "Cherished Memories" for Cochran, and the 1959 hit "Somethin' Else" with Eddie's brother Bob Cochran. Her other songwriting credits included "Hurry Up", recorded by Ritchie Valens.

In April 1960 she traveled to England to join Cochran and Gene Vincent, who were touring there. She and Cochran were reported as being "unofficially engaged".[2] She also recorded a song, "Homework", with producer Jack Good.[1] On the night of April 16, 1960, Sheeley, Vincent, and Cochran were traveling in a private hire taxi from a concert in Bristol to London airport when it blew a tire and slammed into a lamp post near Chippenham, Wiltshire. All three were rushed to hospital. Cochran, who had been thrown from the vehicle, suffered fatal brain injuries and died the next day, at the age of 21. Sheeley suffered a broken pelvis, and Vincent broke his ribs and collarbone and added further damage to his already weak leg.

Following the accident she returned to the United States, where she collaborated with musician/songwriter, Jackie DeShannon on a string of hits, including Brenda Lee's "Dum Dum" and "Heart in Hand", The Fleetwoods' "He's The Great Imposter", and Irma Thomas's "Breakaway". She also co-wrote songs with Chris Curtis of The Searchers, including "Night Time" recorded by Paul and Barry Ryan.[1]

In 1961 she married Los Angeles disc jockey, Jimmy O'Neill. They created the ABC-TV series Shindig! (1964-1966). They divorced five years later, but remained friends. After her divorce, she moved away from the music scene, apart from some public appearances at Cochran conventions in the 1990s. In August 2000, RPM Records released a collection of her songs that were recorded in the early 1960s by a group of session musicians, that included then unknown Glen Campbell, Delaney Bramlett, Leon Russell, David Gates, Hal Blaine and Herb Alpert.

Five days after suffering a cerebral hemorrhage, she died on May 17, 2002, at Sherman Oaks Hospital Medical Center in Los Angeles at the age of 62.

In 1988, Levi Strauss & Co. promoted their Levi's 501 range with an advert titled "Eddie Cochran" and directed by Syd Macartney which told the story of how Sheeley played by actress Sharon Devlin attracted Cochran at a party by wearing said product. It was seemingly narrated by Sheeley and the background song, "C'mon Everybody", was released as a promotional single, followed by a compilation album of Cochran's hits.

Sheeley was depicted by Rosanna Locke in the 1987 film La Bamba.[3]

This article uses material from the article Sharon Sheeley from the free encyclopedia Wikipedia and it is licensed under the GNU Free Documentation License.

Don't Let It Get You Down Crusaders
Update Required To play the media you will need to either update your browser to a recent version or update your Flash plugin.