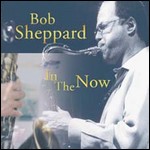 Sheppard has been a studio musician on a wide range of studio, film and television projects, and has also recorded his own albums. Among the many artists he has collaborated with are Steely Dan, Rickie Lee Jones, The Manhattan Transfer, Kurt Elling, Burt Bacharach, Elvis Costello, Randy Newman, Chick Corea, Billy Childs,[1] Scott Henderson, Michael Franks, John Beasley, and Marilyn Scott.

He has recorded as the "Lounge Art Ensemble" with bassist Dave Carpenter and drummer Peter Erskine.[2] He also been an educator at the University of Southern California.

This article uses material from the article Bob Sheppard (musician) from the free encyclopedia Wikipedia and it is licensed under the GNU Free Documentation License.

A Foggy Day Rebecca & The Sophistocats
Update Required To play the media you will need to either update your browser to a recent version or update your Flash plugin.