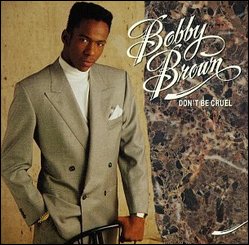 Robert Barisford "Bobby" Brown (born February 5, 1969) is a Grammy Award-winning American R&B singer-songwriter and dancer. After success in pop group New Edition, Brown began his solo career in 1987 and had a string of Top 10 Billboard hits, culminating in a Grammy Award. He was a pioneer of New Jack Swing music, a fusion of hip hop and R&B. His second album, Don't Be Cruel, included popular songs such as "My Prerogative." Brown is the ex-husband of R&B singer Whitney Houston and starred in the reality show Being Bobby Brown.

Bobby Brown began his music career as a member of the R&B boy band New Edition. He is the youngest member of the group since the inception. The group's hits with Brown included "Candy Girl," "Cool It Now," and "Mr. Telephone Man." Brown was voted out of New Edition in 1986 when the other four members felt that their careers would be jeopardized by Bobby's lewd on-stage antics. Throughout the All for Love tour, he feuded with Ralph Tresvant and cut in on Tresvant's lead vocals. In 1996, Brown rejoined the group for New Edition's comeback album, Home Again. In the middle of the tour, he engaged in further on-stage antics. He extended his solo set and cut into Bell Biv Devoe's time. During an interview, he admitted that he was intoxicated during the tour. Once again, he left New Edition. In the fall of 2005, New Edition performed at BET's 25th Anniversary Special. The group performed a medley of its greatest hits, and even brought Bobby Brown on stage for a rendition of "Mr. Telephone Man." It was later announced on BET and Inside Hollywood that Bobby had rejoined the group and would be on the next group album. In January 2006, New Edition announced that the group would launch a new album and tour in 2008. Bobby also appeared at a concert in Columbia, South Carolina that New Edition had filmed for a future dvd release.

In 1989 he contributed two songs (including "On Our Own," which reached #2 on the Billboard Hot 100) to the Ghostbusters 2 soundtrack, in addition to making a cameo in the film. Brown has subsequently dabbled in acting.

In between the "On Our Own" single and the release of Brown's next album, a remix album, Dance! Ya Know It! was released to capitalise on Brown's huge success at the time. A non-album "megamix" single was released to promote the project. The European dance-orientated version (sampling beats by Snap!) was titled "The Freestyle Megamix" and was a hit in the UK, reaching #14 on the Gallup charts. A more R'n'B orientated version called "Every Little Hit Mix" (b/w "Roni) hit the Australian top 10

Brown's third album, Bobby, did not arrive until 1992. It reached #2 on the Billboard album charts and produced the hit singles "Humpin' Around" (#3 on the Billboard Hot 100) and "Good Enough" (#7) as well as a smaller hit in "Get Away" (#14). The album was eventually certified 1x platinum (1,000,000 units sold)[1]. However, it did not come close to matching the album sales or singles chart success of its predecessor.

Brown waited until 1998 to release his next (and thus far, last) album of original material, Forever. The album was originally titled Bobby II and was supposed to be produced by such luminaries as R.Kelly, Teddy Riley, Sean Combs and Jimmy Jam and Terry Lewis. However, Brown negotiated 100% creative control of the album and decided to write all the songs himself. It only managed to climb to #61 on the Billboard Hot 200 album charts and produced no charting singles. There were hopes for a Brown comeback in 2002 when he appeared on the lead single "Thug Lovin'" from rapper Ja Rule's third studio album The Last Temptation. There were even talks that Brown had signed with Murder, Inc. records. In 2006 Brown appeared on "Beautiful," the third single from Damian Marley's album Welcome to Jamrock. He is also set to appear on the new album, Voice of the Streets, by Mike Jones, on a song called "One & Only (Tenderoni)," which also features T.I.

Throughout the 1990s and early 2000s, Brown's legal and substance abuse troubles threatened to overshadow his music. In late 2003, Brown was arrested for misdemeanor battery, allegedly for striking Houston while shouting epithets[2]. In February 2004, Brown was arrested and jailed in Georgia on a parole violation related to a previous drunk driving conviction.

Brown married Whitney Houston in July 1992. Together they have one daughter, Bobbi Kristina Houston-Brown, born on March 4, 1993. On September 13, 2006, Houston's publicist announced that after 14 years of marriage, Houston had filed for a legal separation from Brown. One month later, Houston officially filed for a divorce from Brown.[3] It was ruled by a judge on April 4, 2007 that their marriage would be definitively dissolved on April 24, 2007 and that Whitney would receive custody of their then 14-year-old daughter.[4]

In June 2007, Brown took part in the ITV television series "24 hours with...". "24 Hours with..." is a chat show format as celebrity and interviewer spend an intense 24 hours locked in a room together. The show's host, Jamie Campbell, asked Brown questions about his career and private life, and infamously joked about making "sexual moves" towards the singer. Brown was furious and threatened to beat up Jamie Campbell live on air.

On October 9, 2007, he suffered a mild heart attack in Los Angeles, California[5]. Brown complained of severe chest pains the night before and was taken to two different hospitals. Brown later announced that the story was not true and that he was actually in good health.

Brown's eldest son, Landon Brown, appeared on the MTV show Rock the Cradle. On February 3, 2009, it was announced Brown is expecting his fifth child with his girlfriend, Alicia Etheridge.[6] His fifth child, a boy named Cassius, was born May 30, 2009.[7]

Brown starred in the 1996 movie ,"A Thin Lin Between Love and Hate", along with Martin Lawrence and Regina King.

This article uses material from the article Bobby Brown from the free encyclopedia Wikipedia and it is licensed under the GNU Free Documentation License.

Be Deedle Dee Do Graham Dechter
Update Required To play the media you will need to either update your browser to a recent version or update your Flash plugin.