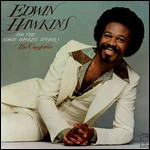 Edwin Hawkins (born August 18, 1943, Oakland, California) is an American gospel musician, pianist, choir master, composer, and arranger. He is one of the originators of the urban contemporary gospel sound. He (and the Edwin Hawkins Singers) is (are) best known for his arrangement of "Oh Happy Day" (196869), which was included on the Songs of the Century list. The Edwin Hawkins Singers made a second foray into the charts exactly one year later, backing folk singer Melanie on "Lay Down (Candles in the Rain)".

At the age of seven Hawkins was already the keyboardist to accompany the family's gospel choir. Together with Betty Watson, he was the co-founder of the Northern California State Youth Choir of the Church of God in Christ, which included almost fifty members.[1] This ensemble recorded its first album Let Us Go into the House of the Lord at the Ephesian Church of God in Christ in Berkeley, California privately (on the Century 70 custom label), hoping to sell 500 copies. "Oh Happy Day" was just one of the eight songs on the album. (The soloists in the album were Elaine Kelly, Margarette Branch, Dorothy Combs Morrison, Tramaine Davis, Reuben Franklin, Donald Cashmere, Betty Watson, and Ruth Lyons.)

When radio stations of the San Francisco Bay area started playing "Oh Happy Day", it became very popular. Featuring the lead vocal of Dorothy Combs Morrison, the subsequently released single (on the newly created Pavilion label distributed by Buddah) rocketed to sales of over a million copies within two months. It crossed over to the pop charts making U.S. No. 4, UK No. 2[2] and No. 1 on the German Singles Charts[3] in 1969. It then became an international success, selling more than 7 million copies worldwide, and Hawkins was awarded his first Grammy for it. Hawkins' arrangement of the song was eventually covered by The Four Seasons on their 1970 album Half & Half. In the 1992 movie Leap of Faith, Hawkins was the choir master for the gospel songs.

In 2007, Hawkins was inducted into the Christian Music Hall of Fame and attended the formal awards show in 2009.

This article uses material from the article Edwin Hawkins from the free encyclopedia Wikipedia and it is licensed under the GNU Free Documentation License.

Just You, Just Me Nat King Cole
Update Required To play the media you will need to either update your browser to a recent version or update your Flash plugin.