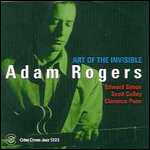 Adam Rogers is an American guitarist specializing in post bop, contemporary jazz, and classical music. Rogers has had a prolific and extensive session history as a recording guitarist having played on over 150 commercially released recordings. He is currently a member of the Chris Potter Underground in addition to leading his own "acoustic" jazz quartets and quintets as well as the genre bending electric trio DICE. He was a founding member and co leader of the eclectic group Lost Tribe. He has also performed and or recorded with Michael Brecker, Cassandra Wilson, Walter Becker, Norah Jones, John Patitucci, Paul Simon, John Zorn and Regina Carter among many others. He is a highly versatile player covering many areas of music but is best known for his work in the modern jazz idiom.

This article uses material from the article Adam Rogers from the free encyclopedia Wikipedia and it is licensed under the GNU Free Documentation License.